I’ve wanted to be vegan since 1973, when I was seven and my mum told me about factory farming.  (Thanks mum.) But I didn’t actually do it until thirty-one years later.

When I finally did, I was working overseas for a few months: I think that helped me to step outside of what my society was telling me to eat, and think for myself.  That is hard to do.

Now that I’ve had a lot of practice at being vegan, I find it much easier.  Practice really does help enormously.

Also, I’ve found that there is a great vegan community easily available online.  You don’t have to join a community in order to be vegan, but I love knowing that the community is there when I need it, and I like to be there for my vegan friends.  I worked for a while at the Vegan Grocery Store in Sydney, and I can tell you that vegan customers are the nicest customers!

My main interest in veganism is that I no longer pay people to do appalling things to animals. 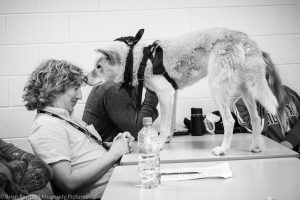 In case you’re wondering about what I do for a living, my work bio reads like one of those things you see on the backs of novels, where it says, “Jason has been a newspaper delivery boy, a hat-check clerk, an elephant whisperer in the Serengeti, and a novelist”  except that I’ve never been a novelist.  Or any of those other things.  Mostly I’ve been a lecturer.

I like typing and talking on the phone, and either I’m a good listener or I’m such a bad listener that I’ve never noticed anybody telling me so.