Hello, my name is Gaurav, I’m a fitness enthusiast, sports lover, comic book/superhero nerd and a banking professional. But most importantly, I’m one quarter of an entirely vegan family.

My wife and I are fortunate enough to be the parents of two vegan-since-birth boys.

In 2011, I made the connection and switched to veganism. Prior to this, my wife had been vegan since 2008, and I became more and more curious about it over time. Upon asking the questions that I had ignored or avoided for too long, I was staggered at the widespread extent of cruelty involved in animal industries. She helped me to see through my own resistance to change.

I, like many in today’s world, was trapped in a state of ignorant convenience, whereby the methods of raising/handling/killing animals was largely unknown to me. Out of sight, out of mind. There’s a reason this occurs in dark, dingy warehouses away from prying eyes. It’s difficult watching such graphic footage, and it’s harrowing for a reason – because deep down we know it is inherently wrong.

First and foremost, I am vegan for the animals. I quickly realised that I do not own a life other than my own. I do not own another living, sentient being’s life. Whether they be human or non-human, I do not own them. Freedom is a right and privilege we are all entitled to. Who am I to choose when another living being can be put to death? Who am I to say that I own someone else’s life, and I can decide that it will be killed for my use or benefit? 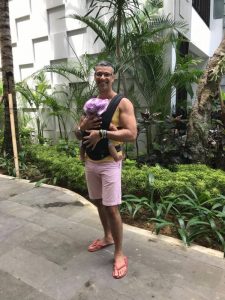 As an entirely vegan family, it is important that we teach this level of tolerance and respect to the next generation, for they are the ones who will also drive the change for a kinder world. Every single person can make a difference, and we do our best to instil these values to our young boys. Breaking the everyday barriers of ignorance, whilst advocating a healthy and compassionate way of living, is something all of us vegans can do within our own circle of family and friends.

For me, I hope my sons draw inspiration from seeing me as a compassionate, strong and thriving vegan man in a not so vegan world. Lastly, I enjoy being in the ‘minority’ in the respect that I am the only vegan man in my working environment. I thrive on breaking down stereotypical misconceptions that vegans are weak, skinny and hug trees all day.

There were times that I could barely get through a workout before, or sometimes needed 2-3 days off to recover as I would wake up so sore the next morning. Not a problem anymore, since I ditched the animal products that were so inflammatory and disease promoting. And, which slowed me down tremendously. 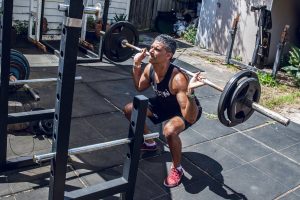 My recovery time has now been drastically improved. I no longer feel lethargic or “heavy” like I did when I used to consume dead animals. I feel much more energetic, and hardly have any muscle soreness the next day after heavy workouts.

When I became vegan, I was 67kg and quite thin. The power of plants has helped me put on considerable size and muscle. I’m now 82kg and love advocating for veganism through my powerlifting and fitness interests. It’s quite incredible the difference it has made. Like most people who go vegan, their only regret is not doing it sooner!

I can now power through a workout and maintain a high-level tempo, lifting significantly heavier weights than I could beforehand. And back it up the next day. I no longer have to deal with the delayed onset muscle soreness and can see the visible results from the work I’m putting in.

As a mentor for Vegan Easy, I’m happy to help with whatever support you need, especially from anyone worried about the effect veganism will have on their fitness or muscle size etc., (usually the guys have this fear more, I’d know because I used to be one of them!).

I think, therefore I am vegan.