Looking back at various points in my life, I think I’ve always had a vegan mindset, but it’s taken me many years to align my lifestyle habits with what I understood intrinsically as a child.

I didn’t really know any better and information about veganism wasn’t as easily accessible when I was growing up. I’ve been vegan for 20 years and prior to that I had stopped eating meat from about the age of 12.

I have a very vivid memory from when I was just a toddler, still wobbly on my feet. It was a hot day, I was barefoot, only wearing nappies and had made my way out of the back door, where I found my mother crouching near the outdoor tap. What I witnessed has remained with me all these years. Mum was stooped over and cutting the heads off the chickens my parents had raised in the backyard. She was washing the blood away. I saw the chickens walking around with their heads cut off, bleeding. Instinctively, I knew that this scene was not right. I could barely talk at that age, but with the few words I knew, I kept asking my mother in Greek (it’s the first language I learnt), “Why? Why?”, “Why don’t the chickens have heads?” It was the only way I knew how to communicate that it was wrong. I kept this up for several minutes. Mum tried to answer, but I kept asking the same thing over and over again. There was absolutely nothing she could say to satisfy me. My mother is one of the most patient people I know, and I rarely recall her losing her temper, but on this particular day she lost her temper at me and made me go back inside…maybe deep down she knew what she was doing was wrong too?

There were other instances too where I remember as a toddler and as a child my parents trying to feed me chicken soup, eggs or meat, and I would refuse to eat them. But growing up in a Greek family where it’s ‘normal’ for everyone to eat meat and other animal products, I was convinced to eat them too, even though I protested many times.

Then when I was about 12 or 13, I read a Michael Jackson biography (I was a huge fan in the early 80s) and in it he said he was vegetarian, loved animals and that’s why he didn’t want to eat them. Well, that made perfect sense to me. It also may have been the first time I had heard about vegetarianism. So, I put my foot down and stopped eating meat. It wasn’t an easy thing to do as I received a lot of opposition from my parents, relatives, family friends – some even claimed I stunted my growth and that’s why I’m so short… I’d say that has a lot to do with genetics. I might be 1.55 metres, but I’m taller than my mum! 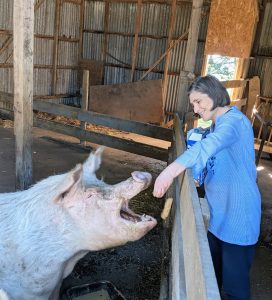 It wasn’t until I was around 30 years old that I had first heard about veganism after I discovered I had a slight intolerance to lactose. Then gradually I learned about what really happens to the animals in the meat, dairy and other animal industries, and made the full transition to vegan. It wasn’t overnight, but once I gained more knowledge about what the animals are forced to endure, it was easy for me to say no to dairy and honey. (Honey was the last thing I stopped consuming).

Even now I’m still learning new things on my vegan journey, especially how to better advocate for the animals and humans. ☺

For me, veganism is an evolving way of life, because there is always something new to learn from vegans and non-vegans alike. There’s always room to improve and discover something more. In fact, I recently completed the certificate in Plant-Based Nutrition via the T. Colin Campbell Center for Nutrition Studies and eCornell University.

Throughout the years I have volunteered for a variety of animal rights and vegan organisations and currently I’m coordinating the Vegan Easy initiative by Animal Liberation Victoria and look forward to assisting Challenge participants on their vegan journeys, as well as learning something from you too!