Hi, my name is Julia and I’ve been vegan since 2015. Prior to that, I had grappled with the mistreatment of animals and in a way supported the idea of ethical veganism for some years before I started my transition.

This was because I was unsure about the health and fitness side of it – having worked as a conference manager in the medical/health sector for years where the standard opinion of veganism in the field was that it was still very hard to maintain health standards. Even after watching ‘Cowspiracy’ and ‘Food Inc’ and other environmental documentaries I still felt conflicted as there just wasn’t enough credible health information available at the time, so I remained mostly flexitarian with a side of guilt.

This changed in October 2015 after making an inspiring friend who was incredibly fit, buff and smashing all kinds of physical challenges. My friend just happened to be vegan, and I loved where we went for dinners etc. This was further solidified after making another friend in my freestyle gymnastics class who was easily the fittest there and also happened to be vegan. Not long after, we attended the World Vegan Day event together and that’s when my vegan journey began. There were slip ups early on here and there while eating out with non-vegan friends etc., but after watching ‘Earthlings’ I knew I never ever wanted to partake in the use and abuse of animals ever again.

Consequently, I fast began to learn the benefits of whole food plant-based nutrition in supporting my own health and the improvements I saw but knew there were misconceptions out there about vegans not being able to achieve optimum health. I wanted to make a difference to change that and realised that to have anyone pay attention I would likely have to have the credentials. So, at the start of 2016 I started a Bachelor of Health Science in Nutritional Medicine to become a nutritionist.

I also wanted to find ways to support the vegan community with my event management skills, so I was introduced to Lucy Stegley from Raw Events Australia (a plant-based health/vegan event initiative). Since then, I have supported Lucy at countless events from health workshops and conferences to documentary premieres often in collaboration with Animal Liberation Victoria (ALV). 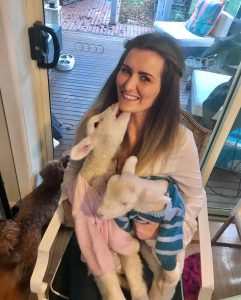 In June 2017, I joined the winter foster lamb campaign with ALV where I fostered my first special little pair of 2-day old lambs, James and Matilda, who were found abandoned and hypothermic. (10 million lambs die in Australia’s winter due to the financial farming advantage of a mother ewe having access to greener pastures, farmers being busier with harvest in warmer months and the genetic encouragement of multiple births which can be routinely troublesome for mothers both giving birth and being able to successfully feed, often having no choice but to abandon the weaker of their offspring).

The fostering turned out to be an epic 12 weeks of bottle feeding and it was all worth it to watch them both be released together into another flock at a beautiful Gippsland sanctuary where they still happily reside.

By this stage my two teenage daughters had also gone vegan. We took in a second pair of lambs, Sonny and Daisy, who were 7 weeks premature and of little use to a local backyard meat producer (or too much time and work raising). In November 2017, both successfully rehomed in a new sanctuary in North West Victoria.

During this time, I had confided in recommended vegan vet, Dr. Robert Gropel for the vaccination, castration and general veterinary work of the foster lambs, with special TLC given to James when he developed an infection. In December 2017, the day before Rob was to fly out to Antarctica to climb Mt. Vinson, he asked if I wanted to grab some vegan food, and a friendship blossomed from then. When he returned a month later Rob shared his vegan adventure stories, which were pretty inspiring on top of his compassion for animals. Having similar interests and both being passionate about making a difference, our friendship slowly evolved into a relationship and we now enjoy outdoor adventuring together. Rob has since finished climbing the Seven Summits of the world (making him the first vegan to do so), skied the last degree of the south pole and traversed Greenland’s icecap pulling sleds on an epic 30-day expedition. Rob now only has one more mountain to climb to complete the ‘7 Volcanic Summits’ and aims to ski the last degree of the north pole to complete his personal achievements in the name of veganism for the animals, the planet and people. He is keen for international borders to lift!

As a recently qualified nutritionist, I plan to run events and workshops for transitioning vegans, and I’m in the process of starting a private practice. My approach to supporting others is free of judgement as I believe that respecting the unique journey each of us are all on, working within that individual’s capacity while upholding their values is the basis of meaningful and sustainable change.