Lets get the basics out of the way first. How long have you been vegan? 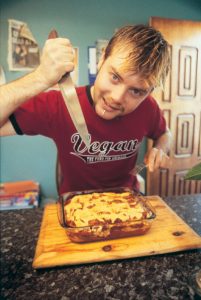 Why did you choose to go vegan?

When I joined Frenzal Rhomb, Jason our singer told me to go vego or I wasn’t allowed in the band. After agreeing mindlessly, I actually started looking into it and realised being vegetarian is good but it’s a bit of a half-arsed cop out, so I took every animal product out of my life. Half out of compassion and half to try and get one up on Jason.

You worked with Triple J for over 7 years as “The Doctor”, what’s the most exciting part of the job?

Getting to talk to cool people, both “rock stars” and nice, normal people. I really liked the thrill of talking to someone really famous and getting them to enjoy the conversation and share sweet things about themselves, but I also really liked having regular people on the show both as talkback callers and just random occasions – some of the best conversations and surprises come from those situations.

In Australia it’s Dumpling King in Sydney (not a purely vego place but the pan fried vegetarian dumplings are worth it), Trippy Taco in Melbourne, Bliss in Adelaide and my house all the time.

When we’re overseas I eat at any and every vego place I can find so it’s hard to remember names. Manhattan has about 1400 vego places, all pretty good. Though we do vegan cheese better than them. And there’s a macro restaurant on the top floor of the department store at Shinjuku station in Tokyo that I would quite happily eat my final meal ever at. The vegan cake display at the counter is enough in itself. 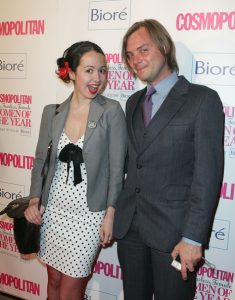 What countries did you find the most difficult to find vegan food in?

It’s never impossible to eat well in any country, you just need to plan and do some research. I’m pretty sure the first couple of times we toured Japan we were unwittingly eating fish stock – I then spent a couple of subsequent tours living on rice and soy sauce before getting hooked up by some local activists at a show.

I had a holiday in Vanuatu and there are no vego places as such but with a bit of foresight and some sneaky hidden tofu and vego sausage pockets in my luggage I ate better than most people on the awesome local waterfall/jungle/snorkeling tours I went on.

You can find stuff to eat pretty much everywhere. Just remember that most people you talk to aren’t actively antagonistic, they’re just uninformed. So don’t kick up a storm if the poor underpaid waiter accidentally served your kumara chips with a side of aioli…

How do you find being vegan on tour?

Half the band is vego and the other vegan, so we have numbers on our side. Although no one else in the band is quite as enraptured by food as I am. I have been known to pay for excess luggage just so I can bring a bag of “supplies”. It’s rarely a hassle though, at least not for me. If I’ve got my heart set on something other than the Chinese bistro at the venue or the carrots and hommus on the rider I can just borrow the gear van and hightail it to the necessary destination. I can usually be relied on to have at least a couple of addresses saved in my phone. Which is better than the days of following endless Wotif print outs to usually incorrect locations.

I do remember dragging the whole band on a 45 minute “mock goose chase” around the streets of Lisbon, Portugal until we finally found a locked door with a “Closed” sign that hadn’t moved for many a month… 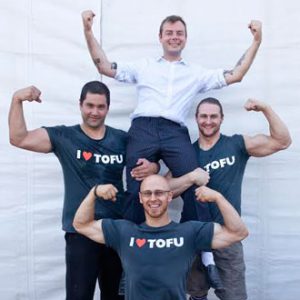 What is the weirdest question you’ve been asked about being vegan?

So many. Maybe “Is it a health thing?” Look at me, I quite obviously am not doing this for MY health. Or “Is it an allergy thing?”, or “Are you just vegan to pick up chicks?” Though to be honest, it probably helps.

You stopped eating meat over 15 years ago.  What has changed since you first became vegan?

Heaps of stuff. From a food point of view, there are so many more tasty options these days. Heaps of mock meat that looks much less like dog food than it used to (I remember the vegan option on the first Australian Warped Tour in ‘98 being slices of sanitarium nut meat on the BBQ), and vegan cheese that actually resembles cheese!

From a societal point of view, even the word “Vegan” is so much more well known, and people don’t snigger so much at it anymore. In fact it’s almost the opposite. It used to be that people would look weirdly at you because being vegan was such an anomaly. Now you’re more likely to have people giggle at you because they think you’re vegan just to be cool. And I’m quite fine for veganism to be “on trend” coz I don’t reckon animals care if it’s compassionate humans or trendhugging hipsters who aren’t messing with them.

Have you been involved in any animal rights activities?

A few throughout my tender years. Been yelled at by carney folk out the front of a few circuses, and held a candle at a Melbourne Cup vigil on occasion. I’ve spoken at a lot of Animal Rights picnics and events too, but I do get a bit cynical at those mutual circle-jerk preaching-to-the-converted festivals of self-righteousness, and so my dissertations, including one titled “Really nice meat eaters versus bunghole vegans: understanding the former to avoid becoming the latter” don’t always go down so well.

What do you think are the most effective ways of helping veganism become more mainstream?

I guess in a world where differences are viewed with suspicion, we just have to be more mainstream. I do think that within every group on every side of politics it’s the lunatic fringe that does the most damage, and sadly in the vego world it’s the same. Sometimes the most passionate and emotional people in a cause can be the least organised and most incoherent, and so can just paint the entire ideology as nutbags, where the most stoic and sensible people should be doing the campaigning.

It was pretty depressing to see a major sponsor of a vego festival I was at get up and start to speak about animal rights and within minutes start spouting nonsense about “Chem-trails” and government climate experiments. I don’t want those people representing what I believe when I know there are so many brilliant and passionate people who could be doing it. Also, the best way to encourage our way of life is to just live it, and live it well. I’ve converted more people over to veganism by eating well with a smile on my face than I have by yelling at McDonalds customers and lecturing teenagers on the responsibility of sentience. Trust me, I’ve tried both…