Marieke Hardy is an Australian screenwriter, blogger, radio broadcaster and reader. In addition to her regular column for ABC’s The Drum, she is a senior contributor to Frankie magazine and The Age.

Marieke Hardy is an Australian screenwriter, blogger, radio broadcaster and reader. In addition to her regular column for ABC's The Drum, she is a senior contributor to Frankie magazine and The Age.

You’ve got an interesting story about going vegan partly as the result of a dare. Could you tell us how that came about?

One of my dearest friends in the entire world, Lindsay McDougall, had been vegan for about thirteen years. We were working together at the ABC and he suggested I go vegan for World Vegetarian Week in October 2008. I figured since I’d given him so much stick over the previous two years about being a sanctimonious, iron-deficient dork I may as well give it a try. Plus Lindsay always made veganism look pleasingly hedonistic and gluttonous, two very important aspects to my diet as I am obsessed with food. 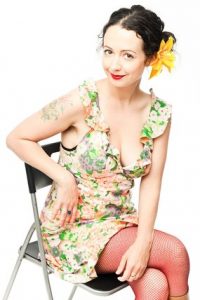 I never, ever expected my entire world to change during that particular week in 2008. Ask any of my pals – I am a *highly* unlikely candidate for veganism. Yet somehow everything was so super easy and I felt deeply I was at last doing something very right. It was the classic choir of angels moment. But without the robes and Jesus.

Have you encountered any difficulties? If so what were they and how have you dealt with them?

I’m a fan of getting in the family van and taking off to the country at a moment’s notice, and obviously small country towns/pubs aren’t the best place to make a fuss over the menu. I also really appreciate the hard work that goes into hospitality and don’t like inconveniencing restaurants. This is usually solved by a polite phonecall before arriving – hello, there’ll be a vegan at your restaurant tonight, hope that’s not too much of a bother, and so on. I’ve found most chefs hugely welcome the heads-up and respond positively. Easily fixed.

How have your family and friends reacted to your veganism?

They were all fairly curious (see earlier comment re: unlikely candidate for veganism), not least because I hadn’t even been vegetarian in the interim – I leapt straight from an omnivorous diet into a vegan one. I think ’startled’ is one word for it. After a brief period of eye-rolling and ‘oh, you’re not *still* fucking vegan are you?’-type banter they grew more used to the idea and have become very supportive and accommodating. It helps that since becoming vegan I have been obsessed with cooking and insist on catering for them, with lavish results.

Often when vegans are portrayed on television they’re shown as slightly unhinged, unwashed hippies or lab bombing terrorists, serving to perpetuate all the worst untrue stereotypes. You’ve worked as a writer on some of Australia’s top dramas, have you ever incorporated any vegan or animal rights themes into your scripts that might present a more balanced view?

It’s difficult to just throw something like that into somebody else’s script – most of the dramas I work on employ me as a freelancer, and it’s my job to make their show sound the way they want it to. I worked on a series for the ABC a few years ago and there are a couple of sly references to veganism in there, but I don’t really believe that soapboxing or pushing my political views through narrative television is the way to win hearts. There have been a couple of occasions where I’ve recommended vegan books on First Tuesday Book Club – Veganomicon and Eating Animals– and am happy to use that nerdy literary platform to share novels I feel are important. The rest of the time I try to break that vegan stereotype by being a vocal, food-obsessed hedonist drunkard who doesn’t take themselves too seriously or perform poetry at dinner parties.

How do you feel the switch to veganism has impacted your health?

Oh, I feel astounding. I eat well and often, and make sure I exercise fairly regularly to balance out all the liquor and good times(TM). I think it’s the combination of incredible food I inhale, and the innate knowledge that I’m finally doing something positive for the world. I always had a very strong reaction to the thought of an animal in pain – I think everybody does on some level, which is why all those news stories of mistreated horses and puppies send Herald Sun readers into an outraged frenzy – though I never really connected it to what I was eating. When I made that connection and knew my diet was no longer causing an animal anguish, I felt even better about the way I lived.

Can you describe some of your favourite meals, takeaway or home cooked?

You may regret asking me this question, as I fear the entire internet doesn’t have enough gigabytes of bandwith or whatever it is to fully support my love of food and cooking, however I shall do my best to condense. Well-thumbed copies of Veganomicon and the slightly twee-ishly titled Vegan Yum Yum are an ABSOLUTE NECESSITY for any vego kitchen. Wondrous tomes.

I trawl blogs on a daily basis to find new recipes – my current favourite is Easy as (vegan) pie. I have already cooked about eight hundred things from her brilliant archives, including this OUTSTANDING potato bake.

And these zucchini fritters.

I also have a kickass recipe I am almost reluctant to share considering its explosive awesomeness. It’s Paul Stamets and Dusty Yao’s Killer Shiitake Recipe, which I also make with oyster mushrooms. You mix together 1/8 cup olive oil, 1/8 cup sesame oil, 4 – 5 tablespoons tamari, ‘two glugs and one splash’ (their words) of white wine, pinch of black pepper and a few cloves of crushed garlic. Cover the mushrooms in this and roast them on 175 celcius for about 40 minutes. A warning: people at your dinner party may weep and try to kiss you. Simultaneously.

I like thematic dinners (are you sorry you asked me yet?) – last week I cooked a Greek feast, with lemony garlic potatoes, a tomato and green bean casserole, vegan spanakopita (again, I adapted Carla’s recipe), an avocado and olive salad, and for dessert, Cointreau-soaked berries with Persian fairy floss.

My all-purpose Lebanese feast involves lentil mujadara with caramelised onions, roasted cauliflower with a tahini garlic dressing (roast the cauliflower for an age with lots of olive oil and garlic and salt ’til it goes all brown and crispy), and blanched green beans tossed with vegan margarine, garlic powder and slivered almonds.

For dessert I make Veganomicon tea-poached pears, and do a chocolate sauce by heating a cup and a bit of vanilla soy milk up ’til just before it boils, then pouring it over a block and a half of broken-up Lindt 70% dark chocolate. Wait a while for the chocolate to soften, then whisk together. This chocolate sauce is AMAZING and VERY DIFFICULT to not smear all over your face with your fingers. NB. this sort of behaviour is not great for first dates. Learn from my mistakes.

I’m slightly bemused by the flap some people experience when I’m coming to dinner and they can’t for the life of them figure out what to cook a vegan. ‘We’ve been AGONISING OVER IT FOR DAYS AND ALL WE FOUND WAS THIS POTATO’ etc. I’ve cooked more since becoming vegan than I ever have in my life. For some reason there’s a belief that a vegan diet is incredibly restrictive. It’s a crock.

Is there anyone who has particularly inspired or helped you? Have you influenced anyone else to go vegan?

I’m inspired by other vegan food lovers, who find great joy in sharing recipes and ideas. I’m hugely inspired by the brilliant Pam Ahern, head mama at Melbourne animal rescue shelter Edgar’s Mission. I met her last year during a photo shoot and absolutely loved her and the work she does there. Meeting Pam gave me the impetus to take my veganism further than just a dietary choice and start taking some action to support animal rights. I do this through combining my eggheady love of books and literature with activism, co-curating a fundraiser for Edgar’s Mission called Women of Letters with Melbourne writer Michaela McGuire.

I think – hope – I’ve influenced others simply by presenting them with beautiful, decadent food and an unfailing sense of optimism about human nature. It’s hard to argue with a full belly.

Humour. I tip my hat to those in there aggressively fighting the good fight – we need passionate warriors from all walks – but I feel there is a general fear among the wider community that vegans are going to get all up in their grill with red shouty faces every time they reach for a chicken drumstick. You’re never going to change anybody’s mind by yelling at them. I think leading a healthy, compassionate existence and being able to take the piss out of yourself makes veganism look less scary. I try to lessen the unknown by being an intensely idiotic smart-alec, which is my general fallback oeuvre. Once people figure out I’m just a happy dumbass who likes to eat everything they grow more relaxed. And maybe when they’re more relaxed they’ll be more inclined to be curious about how animals really get to their plate, and veganism in general. I find if you open the door for them, they may be inclined to walk in themselves.