“Vegan Bodybuilding is not only possible, its optimal,” he says, “within three years from first lifting weights properly and walking on a Bodybuilding stage as a novice, I had won Mr. Universe and become a Pro Bodybuilder. Steroids? Meat? Not a chance.”

"Vegan Bodybuilding is not only possible, its optimal," he says, "within three years from first lifting weights properly and walking on a Bodybuilding stage as a novice, I had won Mr. Universe and become a Pro Bodybuilder. Steroids? Meat? Not a chance."

Could you tell us a little bit about your path to becoming vegan?

Not a straight line – but never a full circle. I walked away from eating meat in my late teens and in recent years I’ve gone 100% plant based, which has prompted me to learn more about the foods I should eat to balance my needs as a bodybuilder. 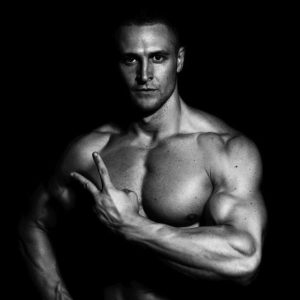 Feeling clean, energised, humble, and empathetic. I get to eat the very best foods on earth and know that if something isn’t easy then it’s probably worth it.

The question everyone wants to know is what do you eat. Could you give us a quick rundown on one of your favourite healthy recipes?

Some people are surprised that I don’t eat as much as they would imagine! For an example – I love to combine a third of a cup of seeds like Pepitas or Hemp Seeds with a cup of Lentils or Chickpeas, mixed with spinach, beetroot, and cucumber and some apple cider vinegar. It’s a simple way of eating – and meets my protein needs and keeps the carbs ‘clean’.

Other than that I love fruit, vegies and whole foods.

What style of training do you currently do to stay in shape?

Besides winning the Natural Mr Universe in 2009 what have been some of your notable athletic achievements to date?

In the spirit of breaking stereotypes I have gone on to win Powerlifting competitions, and break two strength world records on national TV in front of 30 million home viewers!

Did you encounter any discouraging comments from others when becoming vegan and if so how did you deal with this?

It’s pretty hard to argue with me now and that’s the vision I had back when people may have doubted its legitimacy. I was motivated to prove it could be done so I used that ‘negative’ energy to my advantage.

Why were you inspired to start bodybuilding and what are the key factors that motivated you to remain in peak condition?

Partly because I was told I couldn’t be one (as a veg), partly because you peak later in life (the best drug free bodybuilders are in their late 30’s early 40’s) and partly because it gives me something competitive to focus on in an activity I really enjoy. They call weight training Western Yoga you know! 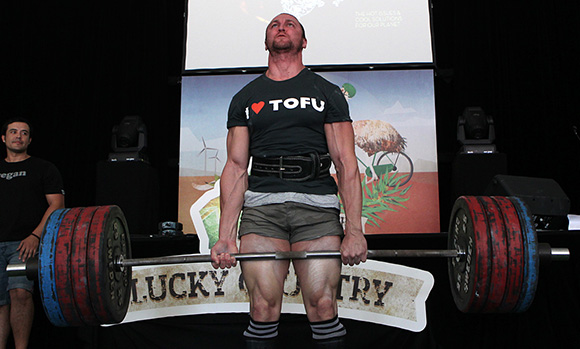 Do you have any advice for anyone considering making the switch to a vegan diet?

Base it around your favourite healthy vegan foods, that way you enjoy the process. Learn what to replace foods with that you’re no longer eating (tempeh instead of meat, beans and legumes instead of eggs) so your body doesn’t crave certain nutrients like protein.

Don’t just think because a food is vegan it’s necessarily healthy either – focus on whole foods otherwise you’ll not get the full appreciation of how beneficial the lifestyle can really be.

Also remember why it’s important to you and why you decided to do it in the first place. Your journey is yours alone, and at many times you’ll need these reasons as an anchor to help you through.

Billy Simmonds provides specific nutrition and training advice for people and can be contacted via billy@billysimmonds.com.