An Indian start-up has found an unusual use for the tonnes of flowers which clog the Ganges: turning them into vegan leather. 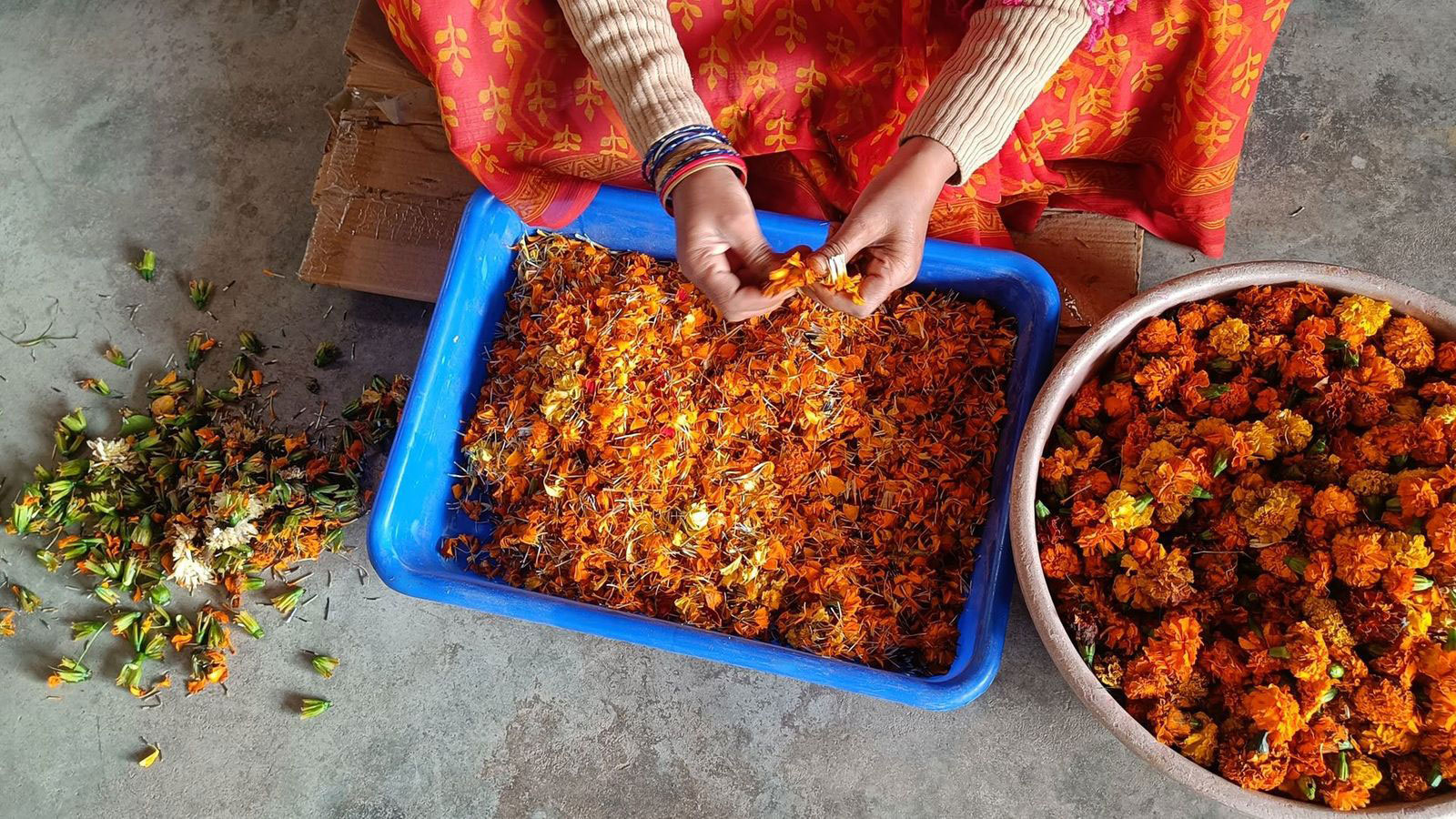 Inside a dusty compound in the northern Indian city of Kanpur lies a sterilised lab with an incubator full of flasks. Each of these flasks contains a small mound of what looks like a sourdough starter.

The room nextdoor houses a shiny metal cylindrical vessel called a bioreactor, akin to what you might expect to find in a laboratory which manufactures antibiotics. But this is no pharmaceutical facility – what is being made in the pipe-laden bioreactor won’t save you from an infection. It could help make India’s rivers a bit cleaner though

It’s called Fleather, and it’s a new material being developed as a sustainable alternative to animal leather. It is delicate and smooth to touch, like soft lamb skin leather, and its journey begins in an unexpected place – flowers.

Fleather, made by a Kanpur-based startup called Phool, is part of an emerging trend of companies producing plant- and fungi-based leather alternatives which aim to disrupt the traditional leather industry and capitalise on growing interest in “vegan” fashion.

Fleather, on the other hand, is made by repurposing floral waste generated in temples across India, and it is Phool’s moonshot. 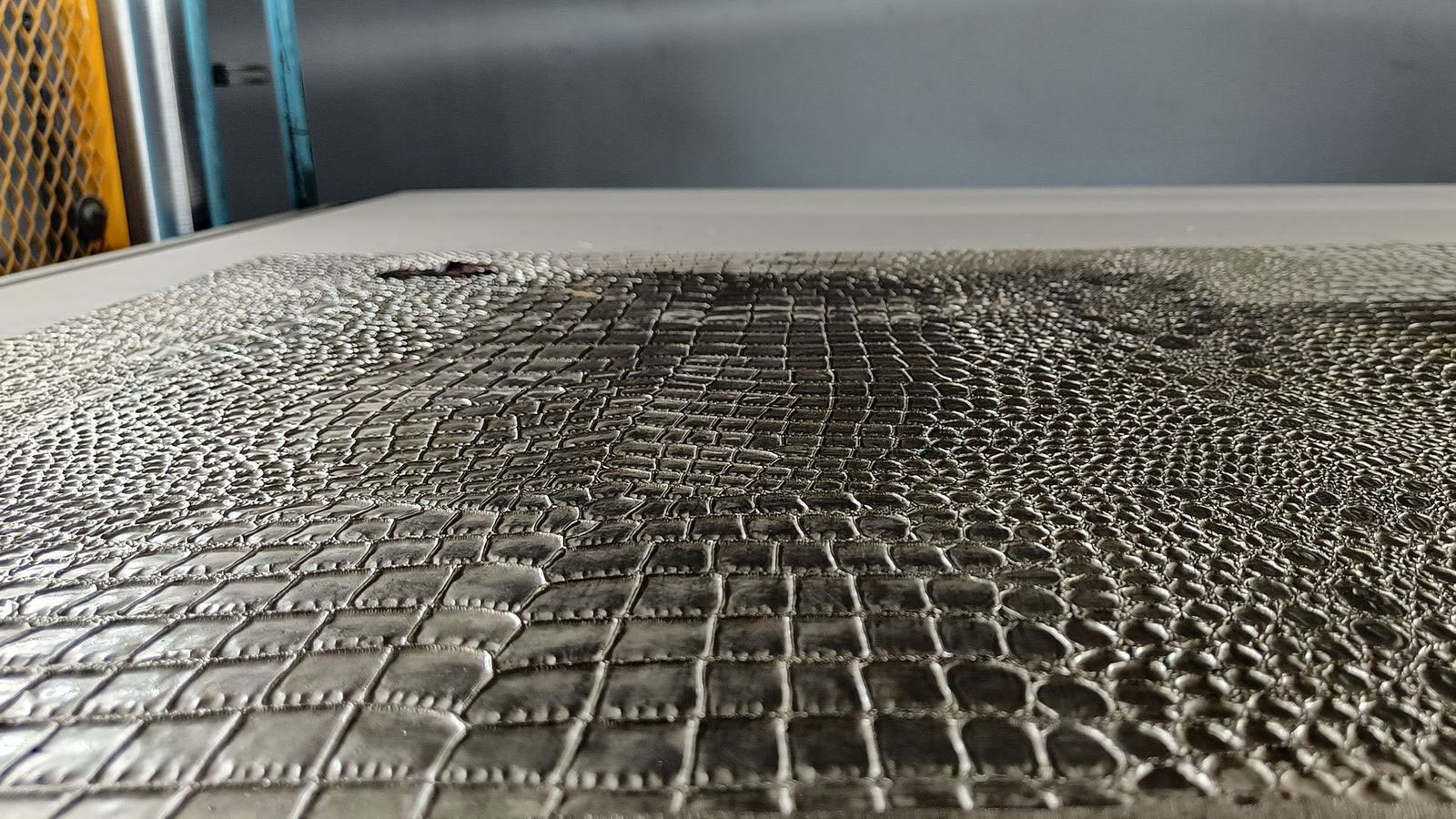 To give them a leather-like appearance, Fleather sheets are embossed with a crocodile-skin pattern Credit: Sushmita Pathak

The startup’s journey began on a cold winter morning in 2015, when Ankit Agarwal and his friend made their way to the bustling bank of the Ganges in Agarwal’s hometown Kanpur for some sightseeing.

The Ganges is believed by Hindus to be the most sacred of all rivers. But the sight that greeted the duo belied this faith. Rubbish was floating on the grey, visibly-polluted water. Among the muck were tonnes of flowers – marigolds, roses and chrysanthemums – discarded by temples and worshippers. These flowers are used in Hindu rituals and are considered sacred, meaning they can’t be disposed of along with other waste.

But depositing them in a river is sometimes part of the ritual and as a result flowers are dumped in water bodies daily where they leach out harmful chemicals from pesticides, and eventually decay into mulch that contaminates the water. Undeterred by the obvious pollution, devotees take ceremonial dips in the Ganges and cup their palms to take holy sips.

The sight disturbed Agarwal, and set him on a quest to find a solution to the uniquely Indian problem of temple flower waste, which he calls “the lowest hanging fruit” among pollutants. In 2017, he zeroed in on an idea to upcycle the flowers into incense sticks, and founded Phool (“flower” in Hindi).

The company is backed by the prestigious Indian Institute of Technology in Kanpur and counts Bollywood star Alia Bhatt among its investors. Every morning Phool trucks travelled around Kanpur’s temples collecting the flower waste before it was dumped into the river. At the Phool factory, workers plucked the petals and set them to dry. The dried petals were then powdered and made into a dough with essential oils which female workers then rolled into incense sticks.

But it turned out that there was a far more impactful and surprising use for the flowers, as the company was soon to discover.

On a humid day in 2018, Nachiket Kuntla, head of research and development at Phool, and other scientists at the company noticed a whitish layer on a pile of waste flowers on the factory floor. 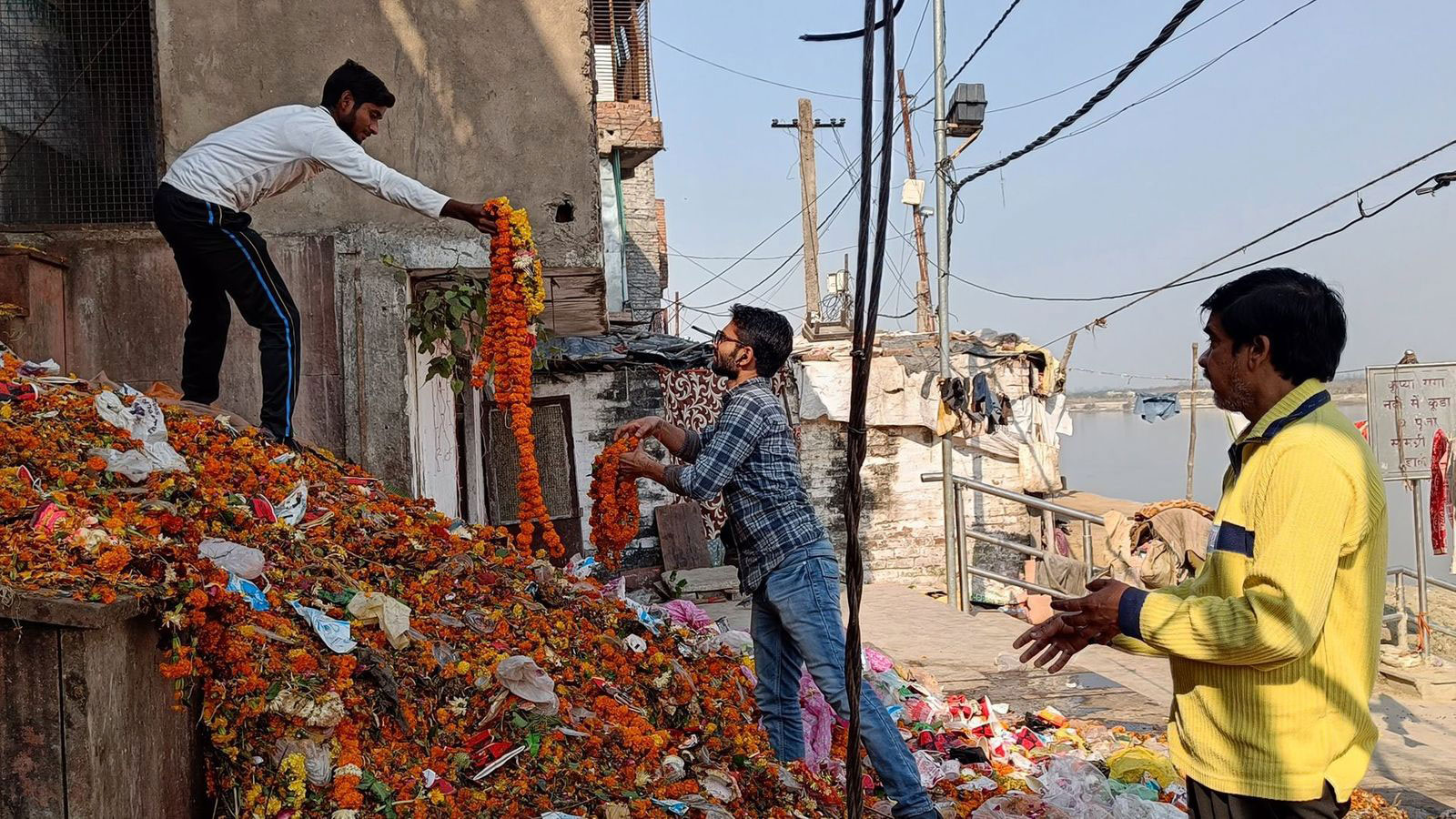 Phool workers collect waste flowers discarded after being offered to the deities at one of Kanpur’s biggest temples situated on the banks of the Ganges Credit: Sushmita Pathak

When they peered closer, they saw a thin fibrous network. It seemed some kind of fungal microorganism was trying to grow on the flowers, drawing nutrition from the cellulose in them, explains Kuntla. Intrigued, Phool researchers started experimenting. They sourced microorganisms from the jungle near the IIT Kanpur campus and fed the flower waste to different microbial strains, tweaking the temperature and humidity to see how it would grow under controlled conditions in a laboratory.

Their initial experiments resulted in a thick styrofoam-type material that could be used in packaging. But the researchers soon realised that the texture of the microbial growth felt oddly familiar. “Someone in the team felt that the touch is leathery,” Kuntla says. “So [we asked], can we create a fabric-like material? That was the thought process.”

They continued experimenting and cultured a couple of species together, says Kuntla. To help the microbes draw nutrients more efficiently and grow better, the researchers began feeding them in liquid form, by boiling the flower petals in water to extract the cellulose and lignin from them and adding some extra carbohydrates.

“[The microorganism] feeds on that, and it grows,” explains Aamen Talukdar, an associate research scientist at Phool. “It produces molecules that are similar to the molecules in leather.”

This was the beginning of Fleather, which Phool began producing in 2021. To make the material today, the team begins with small volumes of the microbes in flasks in an incubator which are gradually grown larger by feeding them on the nutrient-rich flower liquid. Once the free-flowing liquid turns into a thick slurry, indicating that the microbe has attained maturity, the mixture is poured in trays to nudge the fibrous growth to take the form of a continuous sheet.

The tray is then rested for a few days during which an interconnected layer that resembles the rind on a brie cheese takes shape. It is then tanned using a tree-bark powder solution, dried, dyed and embossed with a snake or crocodile pattern. The end result is a soft, supple sheet that feels incredibly similar to animal hide leather.

So far Phool has been able to make several Fleather prototypes – wallets, sling bags, sandals and trainers – which, at first glance at least, look quite satisfactory. 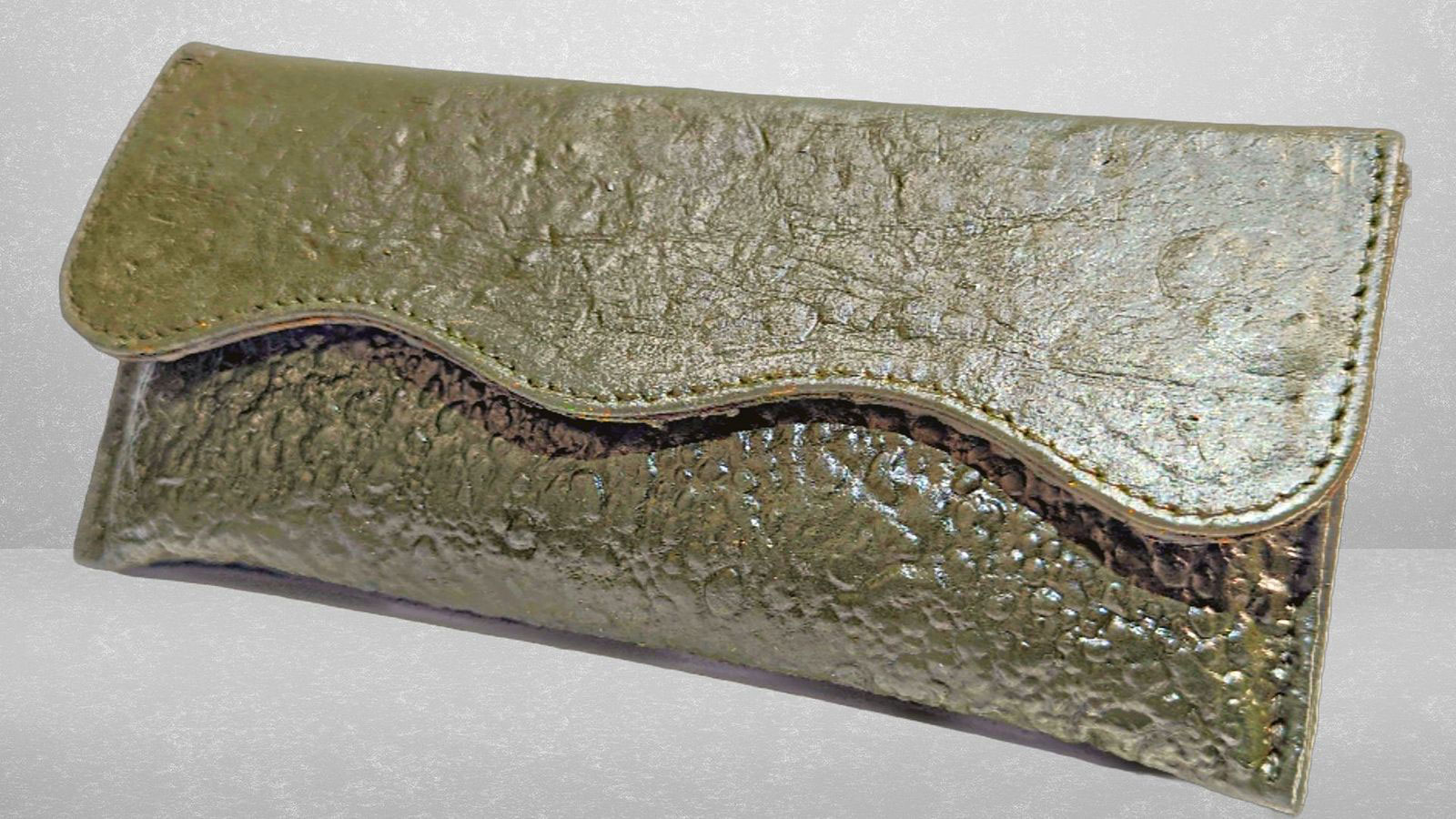 A clutch made of Fleather, a fungi-based alternative to leather that is made by utilising flower waste generated in temples Credit: Phool

However, the material currently falls short for items like belts that require tougher leather, says Kuntla. Leather’s tensile strength ranges from 8 to 25 megapascals, he explains, whereas Fleather has been testing at around 6 to 10 megapascals. “Current experimentation is completely focused on how we can increase the fiber density… to get a stronger material,” says Kuntla.

Agarwal says he feels the company is “10% away from the final thing”.

“Once we get that, it can be the breakthrough that India gives to the world,” he says.

Most faux leather is made from plastic from fossil fuels, but sustainable leather alternatives made from bio-materials have been popping up all over the world

But Fleather is already creating buzz. It was recently a finalist in the 2022 Earthshot Prize, which honours groundbreaking environmental solutions. Phool is now working with PVH, the parent company of Calvin Klein and Tommy Hilfiger, on a Fleather pilot. PVH says it is currently at material development and testing phase of this project. A British luxury car maker and another American fashion retailer have also shown interest in Fleather, Agarwal says.

Agarwal admits the idea is disruptive, more so because Fleather’s birthplace Kanpur also happens to be the mecca of the Indian leather industry. But while Fleather might be the only eco-friendly leather in Kanpur, on the world stage, it is hardly alone.

The rise of vegan leather

Most faux leather is made from plastic from fossil fuels, but sustainable leather alternatives made from bio-materials have been popping up all over the world. (Read more about the fossil fuels used in our clothing)

Last year, Nike partnered with London-based firm Ananas Anam to launch a line of sneakers made from pineapple leaf leather. In Mexico, Desserto makes material out of prickly pear cactus, while Italian startup Frumat has come up with apple skin leather. And earlier this year, Stella McCartney launched a line of fungi handbags. (Read about how fungal materials could open the door for a human colony on Mars). 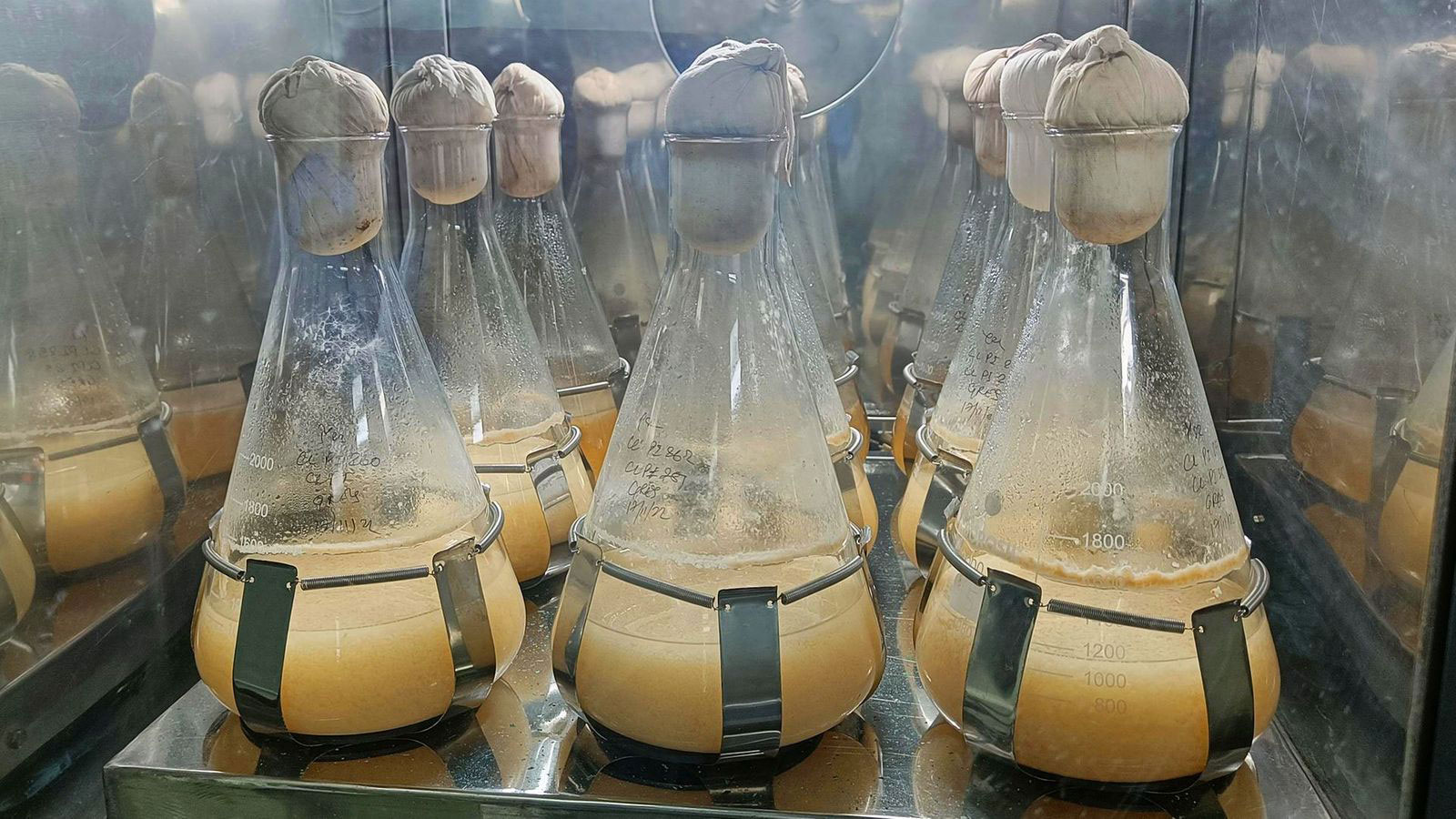 But these aren’t always a perfect solution. “Compositions of most other plant-based alternatives utilise polymers as a binder in the production process that lead to them being partially non-biodegradable,” say Charlotte Borst and Saatchi Doshi of Fashion For Good, an Amsterdam-based global initiative working on sustainable fashion. Not only is Fleather 100% biodegradable, they say, it is also more breathable than other alternatives. Phool, which was part of Fashion For Good’s innovation programme in 2020, claims that Fleather decomposes entirely in about 90 days when buried in soil.

“A positive trend is that more and more companies are now working on 100% plant-derived materials,” write Borst and Doshi. They say that materials like Fleather that are derived from mycelium – the root-like structure of a fungus – “stand out as a unique category”. Such materials can mimic the so-called grain of bovine leather, they say, and have a similar warm and supple touch and feel.

For Fleather or any bio-based leather to truly capture the fashion world…durability and longevity are important considerations, says Mukta Ramchandani

But the most high performing and biodegradable options are not yet scaled. Phool’s small lab in Kanpur has a maximum capacity to manufacture about 9,000 sq ft (840 sq m) of Fleather each month, says Kuntla – enough to produce about 2,250 wallets. The biggest individual sheet they’ve grown so far is about 9 sq ft (0.8 sq m).

Scaling up will mean figuring out how to grow larger Fleather sheets while maintaining quality. The pioneer in mycelium-based leather, according to Borst and Doshi, is New York-based firm Ecovative whose material can be grown in sheets of more than 450 sq ft (41 sq m) – a size and scale which they say is “unprecedented”. 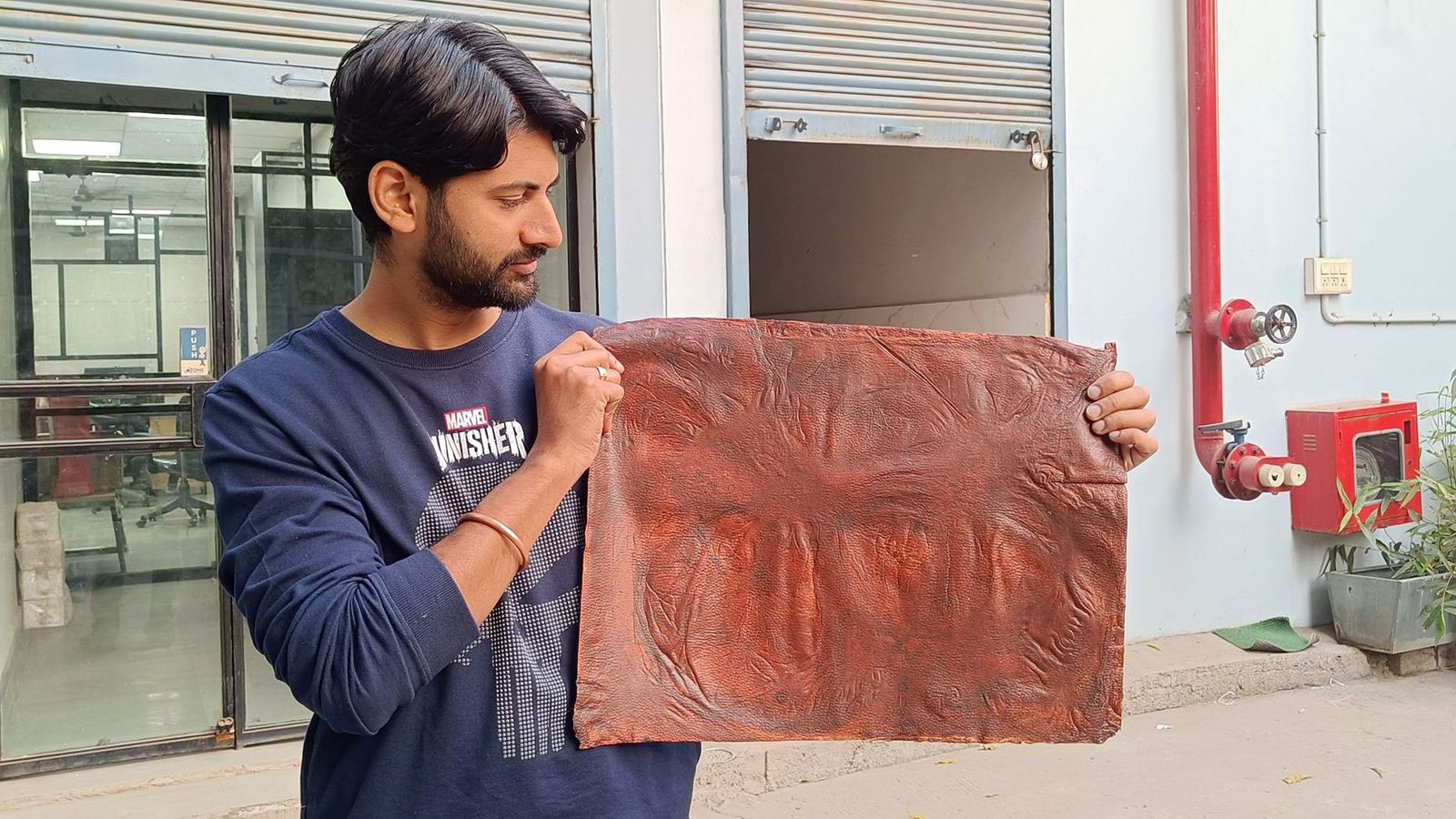 Kuntla is confident sheet size won’t be a constraint for Phool for long. The feedstock is also not a concern, he says. Studies have shown that a single temple can generate hundreds of kilograms of flower waste each day. And if that isn’t enough, Kuntla says, they could also use agriculture stubble that farmers usually get rid of by burning, causing deadly air pollution across northern India each winter.

Luxury items, like Hermès leather handbags, for example, are passed down from generation to generation, she says, but it is doubtful if the same could be said for plant-based alternatives 20 years from now. Still, Fleather is “a really good innovation in the right direction”, she says, and more research should be encouraged.

Even though several fashion giants have launched pilots with bio-based leather alternatives, Ramchandani says it is unlikely that genuine leather will be completely phased out anytime soon. Borst and Doshi from Fashion for Good concur that vegan leather alternatives should be thought of “as a separate category as opposed to a like-for-like replacement for bovine leather”.

Agarwal’s ambition, though, refuses to be tamed. “I want to make animal leather history,” he says. “I’m not sure if that happens in my lifetime but yes, that will happen.”