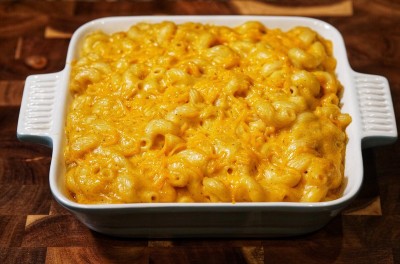 We've been experimenting for some time to perfect our baked mac & cheese and you guys this is a hit!This is the BEST vegan baked mac & cheese. PERIOD! We promise you won't be disappointed. A lot of people don't like Daiya cheeses, BUT this new formula in the Cutting Board Edition is GREAT. However, there are so many other vegan cheeeses that are great also, such as Vio- Life or Good Planet Foods. They both work great with this recipe also, so the choice ultimately up to you!

It was fun and exciting learning how to remake all of our favorite dishes before becoming vegan. Our specialty is recreating comfort foods and Caribbean classics. See all recipes by Carlos