Acting Sergeant Brendan Whitefield said the semi-trailer was fully loaded with "thousands and thousands" of chickens.

The clean-up is continuing after a truck carrying thousands of chickens crashed over the side of an overpass in Geelong, scattering crates of chickens across the embankment below.

The truck rolled off the side of the Princes Highway overpass at North Geelong about 10:15am, landing on an embankment beside Corio Quay Road. 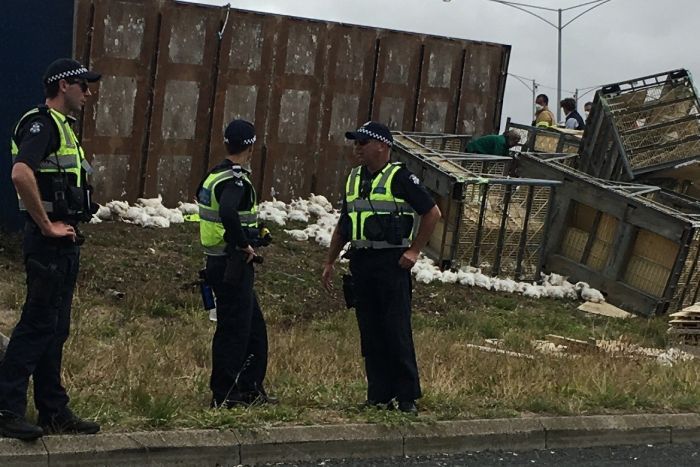 The truck driver, a 58-year-old Drysdale man, injured his arm and was taken to Geelong Hospital in a stable condition.

Acting Sergeant Brendan Whitefield said the semi-trailer was fully loaded with “thousands and thousands” of chickens. He said while many birds survived the rollover, a number of others were killed or injured.

“It’s been a very stressful operation and I’m sure it’s taken quite a toll on those who are still at the scene,” he said.

A large truck lies on its side next to the road. Police standby and crates are strewn next to the truck. He said the local council’s animal management teams and vets were called to help deal with the poultry, euthanase injured birds and recover survivors.

“It’s distressing, no-one likes to see that sort of stuff, it was a horrendous scene,” he said.

Hundreds of chickens appear to have died after the truck rolled off the highway.

Police say it is unclear what caused the rollover. But the incident has caused significant traffic congestion throughout the day.

Police said once the clean-up of chickens was complete, crews would start work on righting the truck.

They said once the scene was cleared, it may take some time to replace barriers on the side of the bridge which were damaged during the incident.