Start-up says it has cracked the secret of juiciness in meat including plant-based beef and lamb flanks. 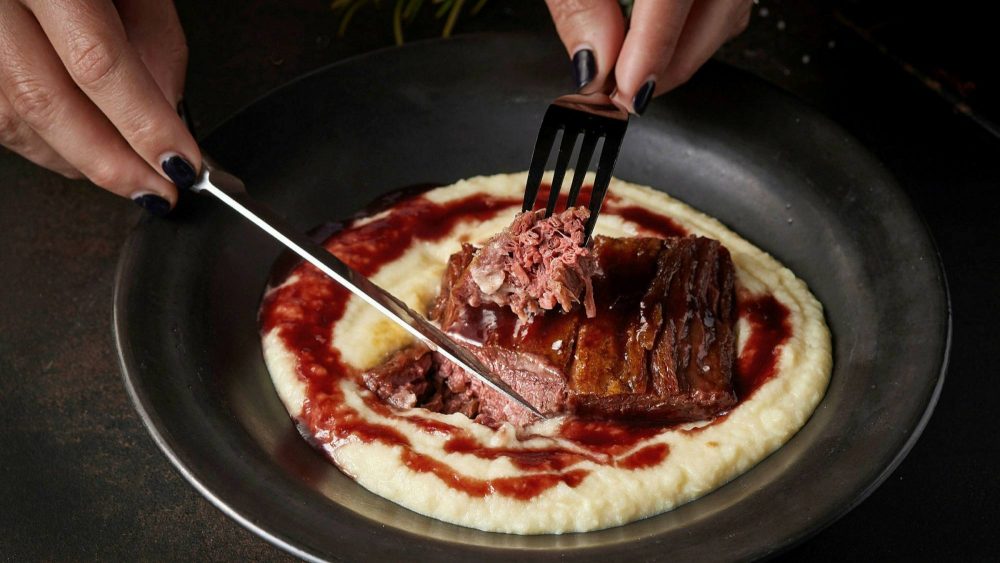 The ‘holy grail’ for the industry has been to produce ‘structured’ meats that resemble cuts of beef or chicken visually and in texture image: A dish containing plant-based meat by Redefine Meat

An Israeli start-up has launched a 3D printed plant-based meat, making whole “cuts” of the vegan product available for the first time in restaurants in Europe and Israel.

Redefine Meat, which produced its first 3D printed plant-based steak in 2018, can “print” 10kg of plant based meat an hour. Its beef cuts aim for the fibrous texture of real meat and are made from soy and pea protein, chickpeas, beetroot, yeast and coconut fat.

The company, which raised $29m in early stage funding in February, has a partnership with food flavouring company Givaudan and claims to have cracked the secret of juiciness in meat.

Dishes made from its products, including beef and lamb flank cuts as well as minced beef and pork, will be available in restaurants such as Marco Pierre White’s steak houses and Indian restaurant Brigadiers in the UK, and Michelin starred restaurants Ron Gastrobar in the Netherlands and Facil in Germany.

The launch comes as the plant-based protein market becomes increasingly crowded and multinational food companies such as Nestlé get in on the act. Beyond Meat in the US paved the way with its plant-based burgers but until now, offerings from the plant-based meat industry have largely been alternatives to minced meat products such as beef patties and chicken nuggets.

The “holy grail” for the industry has been to produce “structured” meats that resemble cuts of beef or chicken both visually and in texture.

While plant-based alternatives simulating cuts of meat are available in supermarkets, they mostly lack the fibrous texture of the real thing. Food entrepreneurs and scientists trying to recreate the texture of meat are looking at the structure of mycelium, a network of fungal threads, and turning to 3D printing.

3D printing can also be used to recreate the marbling of steak or the defined areas of fat and muscle in bacon, according to research group IDTechEx. “Technology is progressing quickly in the plant-based meat industry and the next few years could be pivotal in deciding whether plant-based meat is able to disrupt the global meat industry,” it said.

Other start-ups working on 3D printed food include Spain’s Novameat, while Israel’s Aleph Farms has created a 3D printed rib-eye steak made from incubated cow cells.

Eshchar Ben-Shitrit, chief executive and co-founder of Redefine Meat, said global meat consumption needed to be reduced to help with environmental problems such as deforestation. “Most of the crops produced go to animal feed. We have a genuine solution that today, not in 2030, preserves all the culinary aspects of meat we know and love, but eliminates cattle as a means of production.”