Is Meat Really that Bad?

With nearly 3 million views and uploaded only one day ago, this video about the impact of meat on climate change and the environment is certainly making the rounds! 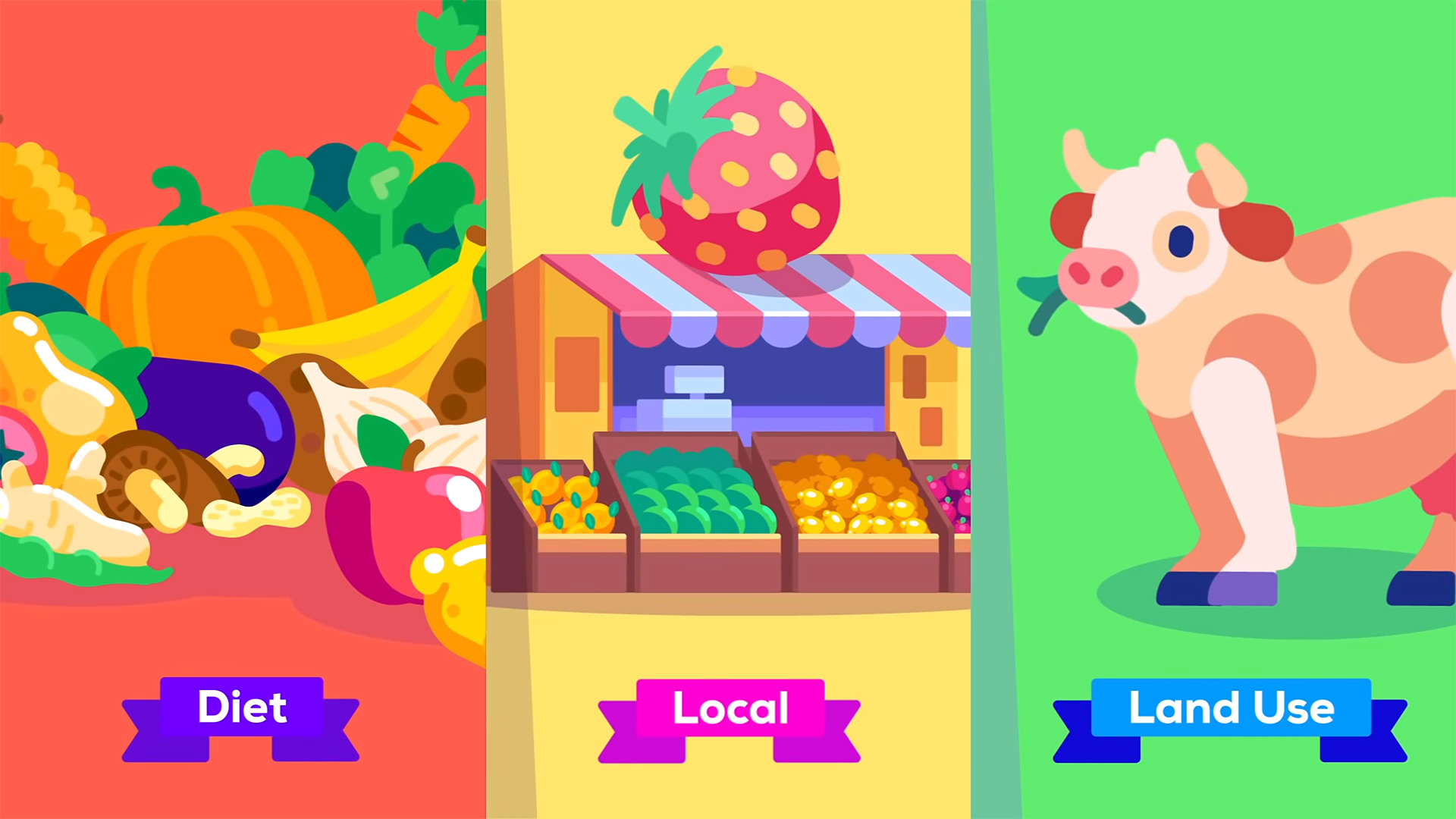 credit: from ‘Kurzgesagt video ‘Is Meat Really that Bad?’

“Food is arguably the best thing about being alive. No other bodily pleasure is enjoyed multiple times every day and never gets old. It is an expression of culture, our parents’ love and a means of celebration or comfort. That’s why it hits a special nerve when we are told we should change what and how we eat to fight rapid climate change.”

Created by the team behind popular YouTube channel ‘Kurzgesagt – In a Nutshell’ the cleverly crafted animation, Is Meat Really that Bad?, simply lays out the facts and allows the viewers to decide for themselves what the better choices are for the future of our planet.

It is by no means a vegan or an animal rights video. It merely explains the science behind food emissions and food’s environmental impacts in a logical manner, and it does so by answering these three questions:

1 Does our diet REALLY play that big a role in climate change?

Emissions from different foods can vary quite a bit. The team referenced the study by researchers Joseph Poore and Thomas Nemecek to create the comparison of food emissions visual below. 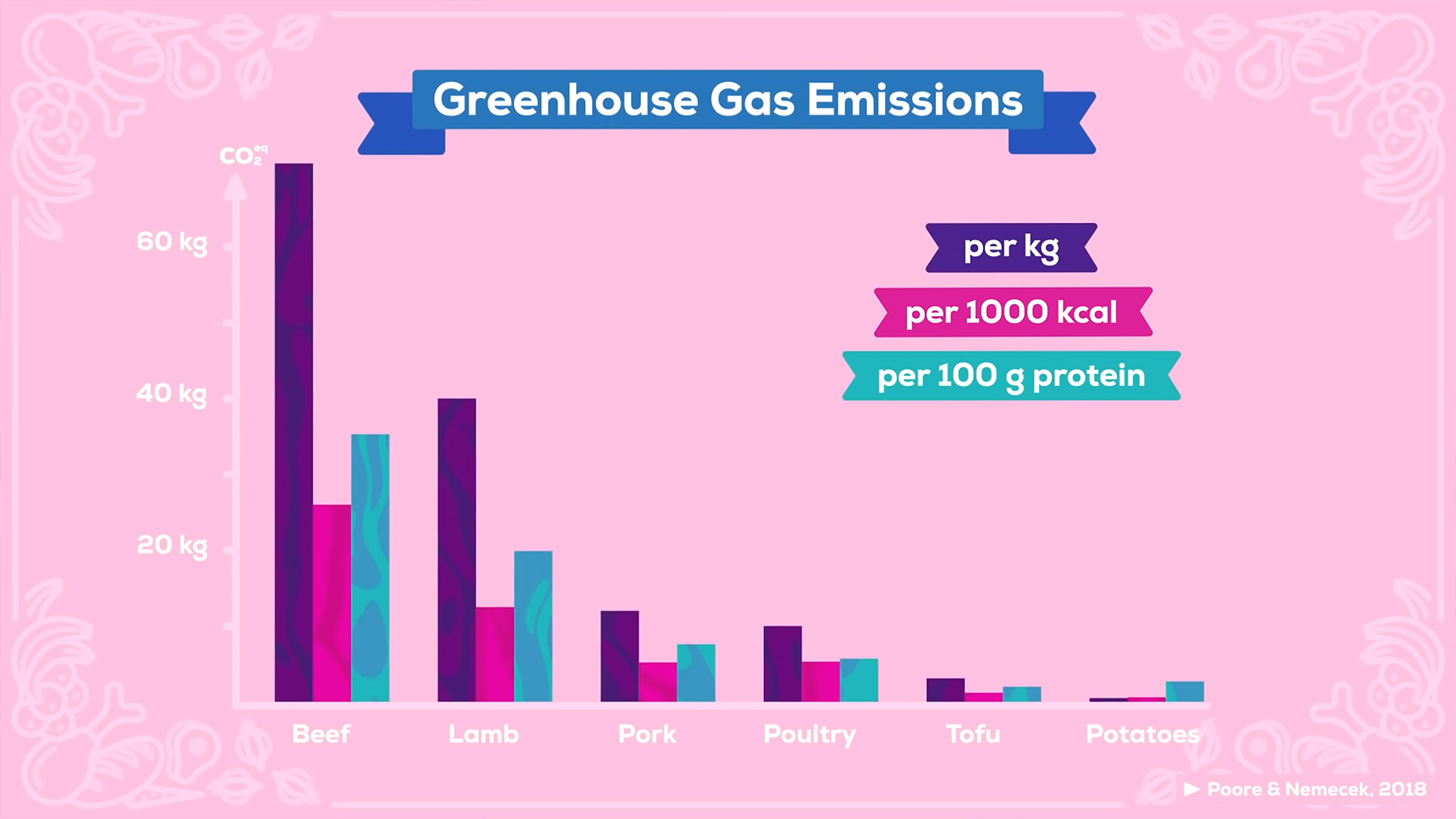 above: Screenshot from Is Meat Really that Bad? depicting greenhouse gas emissions comparisons of certain foods.

It seems buying local won’t make a huge impact in emissions reduction, and for the case of beef the largest source of its emissions is the methane released by the animals, which can cause warming of the atmosphere at 86 times more than CO2 over a 20-year period. 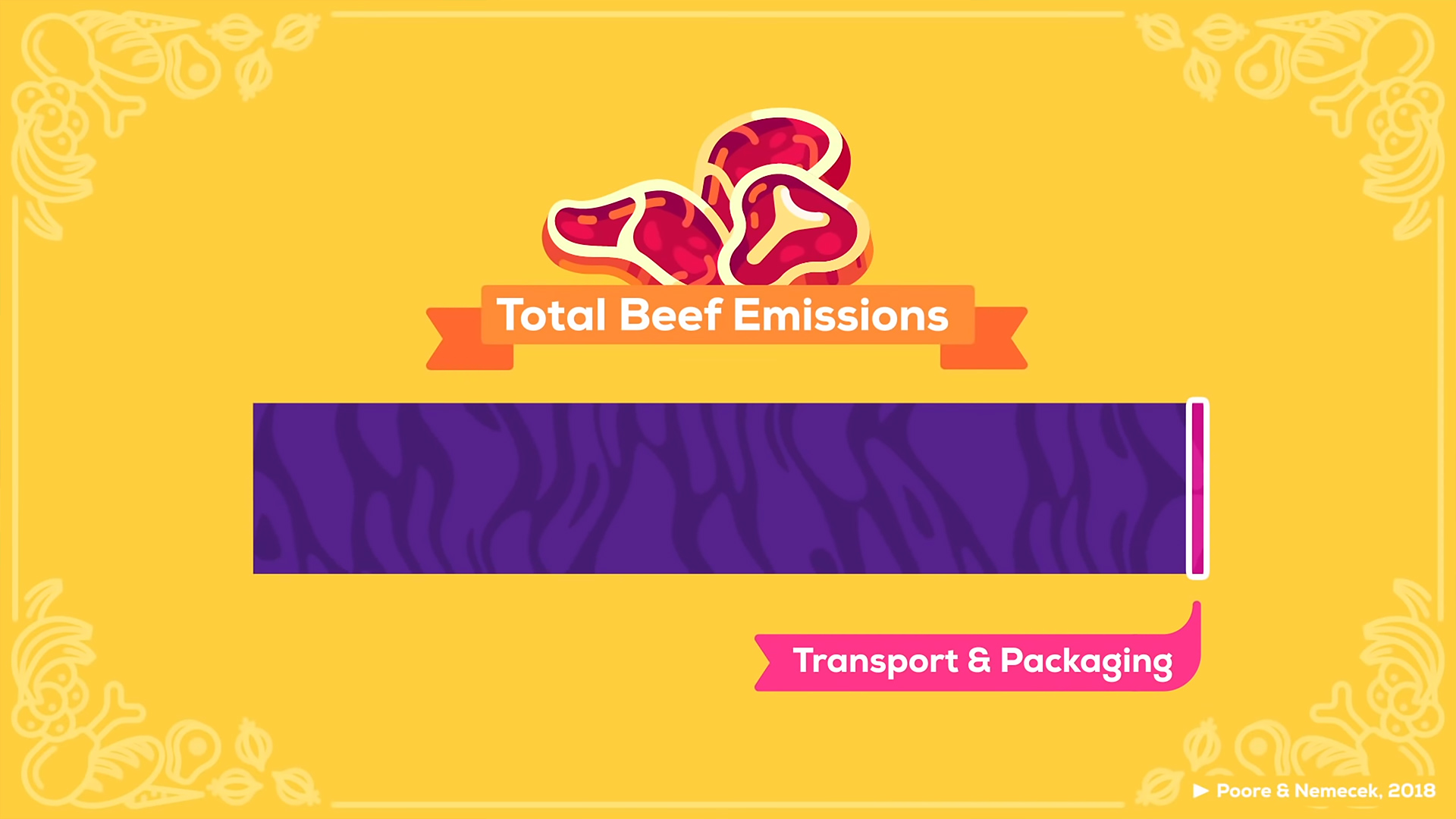 above: Screenshot from Is Meat Really that Bad? the transport and packaging emissions from beef only account for 0.5 to 2% of its total GHG emissions.

3 Don’t cows mainly use land that we can’t use for agriculture or other things?

Pastureland on its own cannot sustain all the ruminants used in livestock agriculture, that’s why feed crops are grown, which take up a lot of land and contribute to deforestation.

Less than half of the world’s cereals are used to feed humans. Looking at soy crops in particular, only 19% of global soy production goes towards products for humans. About 77% is used to feed animals. 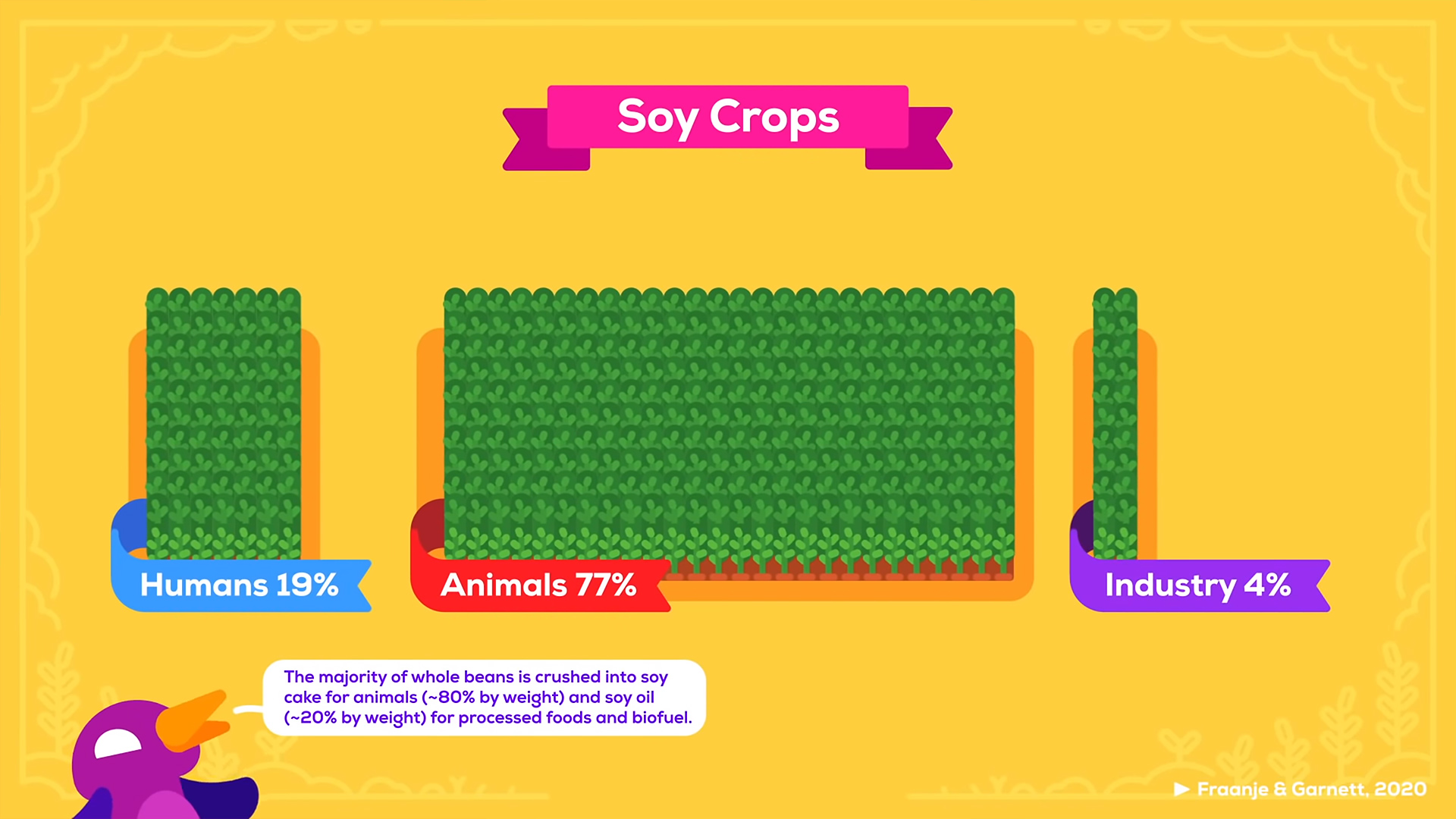 above: Screenshot from Is Meat Really that Bad? distribution of global soy crops.

If all the world’s population adopted a vegan diet it would free up around 3 billion hectares of land that could be used to regrow forests and restore natural habitats and grasslands – which could remove about 800 billion tonnes of CO2 from the air over a 100-year period. To put this into perspective, we currently emit about 50 billion tonnes of CO2 equivalents per year. 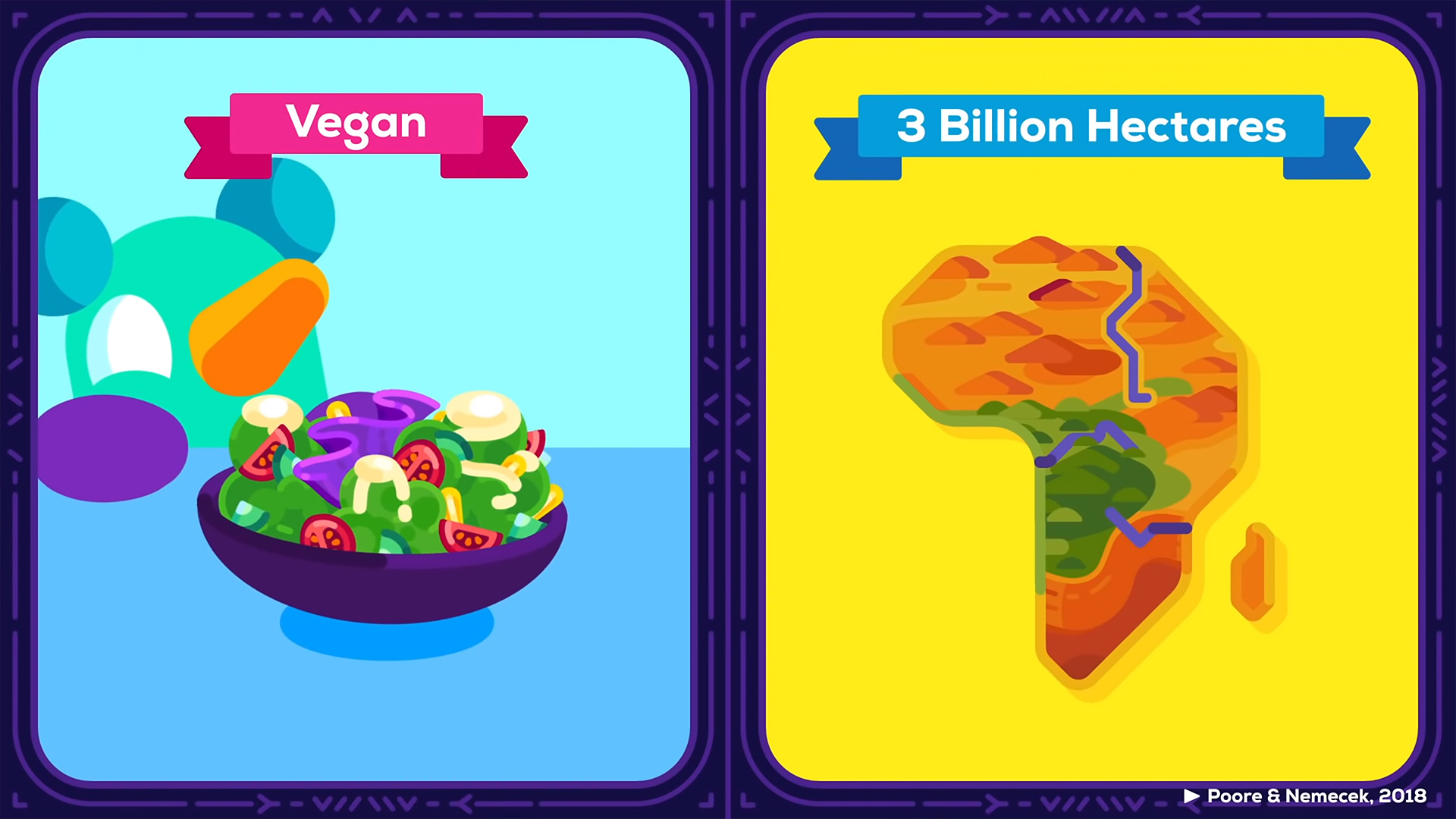 above: Screenshot from Is Meat Really that Bad? a worldwide vegan diet would free up 3 billion hectares of land.

The main take-aways from this great, shareable video is that food, particularly meat from animals, is a huge driver of greenhouse gas emissions and that eating vegan results in the lowest emissions.