Joel took home first prize in the ANB Victorian Championships and second prize in the NABBA/WFF Bodybuilding International (to add to his ever growing collection of trophies!) in 2009 and 2010.

Joel took home first prize in the ANB Victorian Championships and second prize in the NABBA/WFF Bodybuilding International (to add to his ever growing collection of trophies!) in 2009 and 2010.

Can you tell us about yourself?

I enjoy weight lifting, watching sports and spending time with family and friends. I work full time in the sports nutrition field and like to spend my free time with my two dogs (a Maltese X and beagle) and trying out different foods to help with building muscle and lifting more weight.

How and why did you go vegan?

I went vegan because I don’t think it is right to exploit animals in any way for my benefit. I have discovered so many other foods which are very nutritious and tasty and have helped me not only feel good but also enhance my athletic ability. I have eaten animal products in the past but ever since I cut them out of my diet I have felt more energetic and also feel better morally. 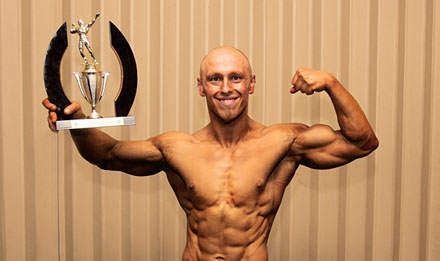 Did you encounter any difficulties? If so what were they and how have you dealt with them?

I have never really encountered any difficulties with eating a vegan diet or following a vegan lifestyle. There are certain things, especially being involved in bodybuilding, that are not often vegan friendly, like weightlifting belts, supplements and tanning products. Having to look for alternatives for these have been the only difficulty that I have come across. The food itself has never been a problem.

How have your family and friends reacted to your veganism? Have you influenced anyone else to go vegan?

My family have always been supportive. I was brought up to be aware of where food comes from and how foods can affect health so for the most part I have been eating healthily. Having trained and competed for years now, people often ask about my diet which provides me with the opportunity to tell them that they do not need to eat animal products to grow and build muscles. As a result a lot of people I have spoken to have decided to reduce their intake of meat, milk, eggs and milk derived protein powders. 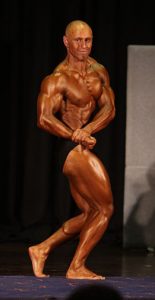 How do you feel switching to veganism has impacted your health?

It makes me feel a lot healthier and stronger.

What are some of your favourite meals, takeaway or home cooked?

During my dieting season I tend to eat a lot of tofu, broccoli, spinach and protein brownies. The brownies are made with sunwarrior brown rice protein powder, almond butter, flax meal, walnuts, cinnamon and almond milk.

Being involved in the bodybuilding industry I come across a lot of ‘meat heads’ who believe that they need to eat kilo after kilo of meat to put on muscle.  These individuals are clearly misinformed and rely on magazines and outdated information.

Is there anyone who has particularly inspired or helped you?

I have undertaken a lot of my own research with respect to bodybuilding and nutrition however with respect to powerlifting, MVS (Melbourne Vegan Strength) have been really supportive.

I believe that there needs to be more advertising, particularly in the health and fitness industry, as this industry is specifically targeted by the meat and dairy industry. Also, vegan friendly food needs to be more readily available and stocked at regular supermarkets.

How did you become a professional bodybuilder?

For me bodybuilding is just a hobby. Prior to bodybuilding I played soccer however I sustained a knee injury which ended my ability to continue playing (I was a goalie so I needed a pretty sturdy knee when throwing myself on the pitch). As a result I turned to weight training and the rest is history.

What do you think of the stereotype that vegans can’t get big and strong?

I believe that it is just an excuse that people use to continue eating meat.

What do you eat and do you take any supplements? 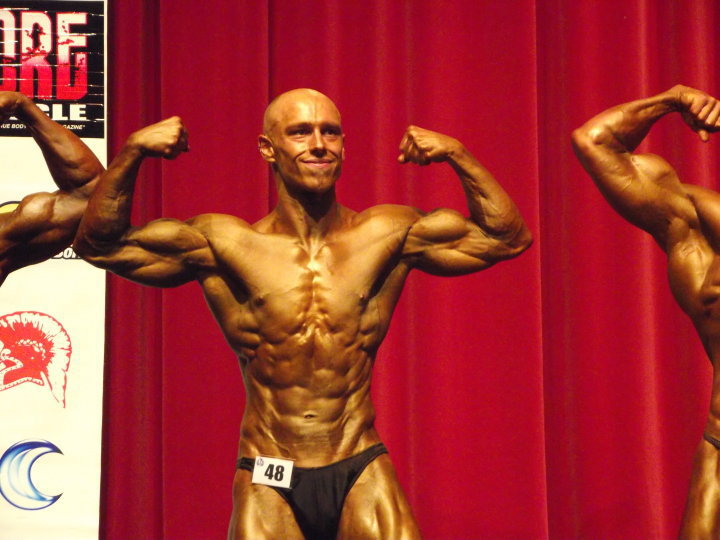 How do you feel being vegan has effected your progress as a strength athlete?

As a strength athelete I do not feel as though I have yet reached my maximum potential, however I feel as though me being vegan has not hindered my progress. It is difficult however training for both powerlifting and bodybuilding as they have competing interests.

Train hard, eat clean and don’t be fooled into believing that you need to eat huge amounts of protein! Always look for advice from reputable sources (not just magazines).