Dr Robert Gropel is an accomplished mountaineer who has completed high-level expeditions and also runs a busy vet practice in Melbourne, Australia. 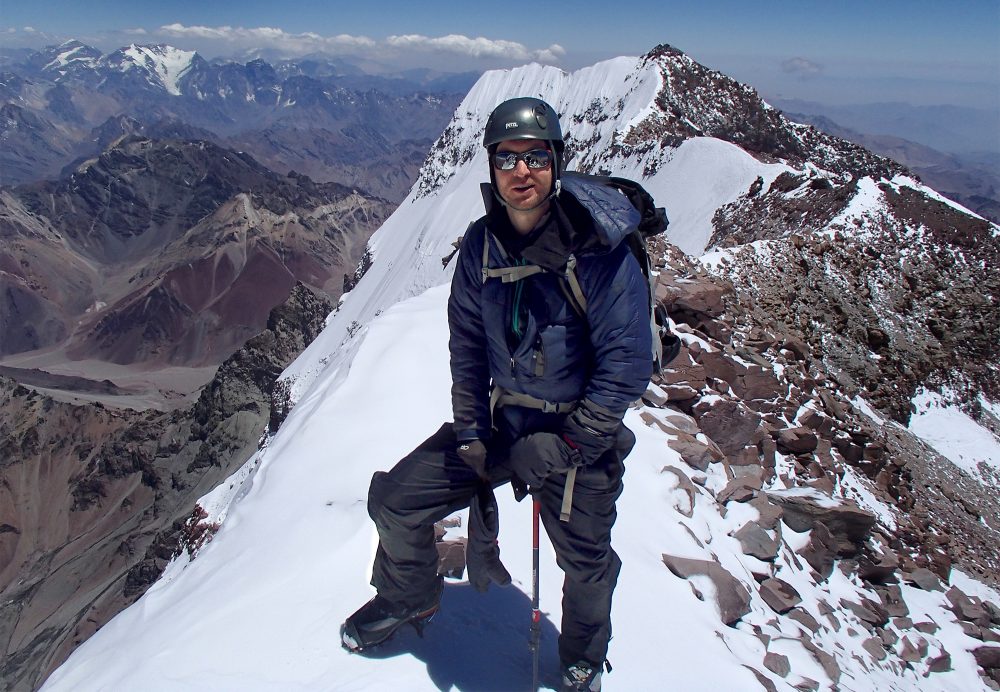 I grew up in Eaglemont, Melbourne. I was a very active teenager playing sports and I travelled a lot with my parents. Being an only child, I spent a lot of time with neighbours and friends, but I also spent a lot of time on my own. I would read books, play games and spend time with family animals (cats/ dogs). From this I developed a connection and a sense of empathy for animals which has stayed with me through adult life.

I moved to Brisbane to study Veterinary Science for five years. During the holidays I spent time volunteering overseas at different sanctuaries gaining wonderful and, at times, confronting experiences. I volunteered at the Ananda elephant sanctuary in Sri Lanka and the mobile veterinary elephant ambulance with WSPA. The Dog and cat rescue Samui rescue in Thailand, the VSPCA in Visakhapatnam India and a spay/neuter program in Micronesia.

Once I graduated I moved back to regional Melbourne with my girlfriend Marisa and worked in mixed practice. I learned to care for a variety of animals including horses, alpacas, sheep, cats and dogs. It was around this time we started bushwalking around Australia and mountaineering in New Zealand.  After a couple of years in mixed practice, we moved back to Heidelberg where I focused on treating cats and dogs.

In 2014 Marisa and I opened the Ivanhoe East Veterinary Hospital. I have been working there ever since. I’m lucky to be surrounded by a great team of nurses who are all so dedicated and compassionate. In a tragic event Marisa passed away in 2016. I have been fortunate to have a great family, friends and workmates by my side.

I currently have two cats, Comfyshoes and Tinkerbell who are great company and I’m lucky to continue living a vegan life with my loving partner Jules.

Please share your vegan story and whether you encountered any challenges along the way.

My vegan story started at Vet school. Vet students didn’t think about going vegetarian or vegan back in my day as the animal agriculture industry was indoctrinated and promoted as the norm from day one of university. One of my good friends was a stout vegetarian and he inspired me to think beyond myself and to consider farm animals as more than just food. That they, like dogs and cats, have emotions and feelings. Rapidly Marisa and I became vegetarian in 2003, which we remained for 10 years.

In 2013, when I was working at the Lort Smith Hospital, a vet nurse (and devoted wildlife carer) Nikky, opened my mind to the egg and dairy industry. At first, it was difficult to accept that I had been ignorant to the cruelty in these industries (it is a well-kept secret). Marisa and I felt no choice but to go vegan. I employed this inspirational nurse at my new clinic and we have remained good friends ever since. My transition to veganism wasn’t difficult as my wife was a magnificent support.

What inspired you to become a mountaineer and how long have you been doing it?

My parents introduced me to the outdoors at a young age. They took me across the Overland track in Tasmania when I was 8 years old. It is a natural progression to push into more remote and wild places as you get more experienced.  To witness the curve of the earth from the heavens is one of the experiences that keeps pulling me back. Each mountain, country, challenge, companions, environment, wildlife and culture is different for each expedition. They are fantastic and life changing experiences. 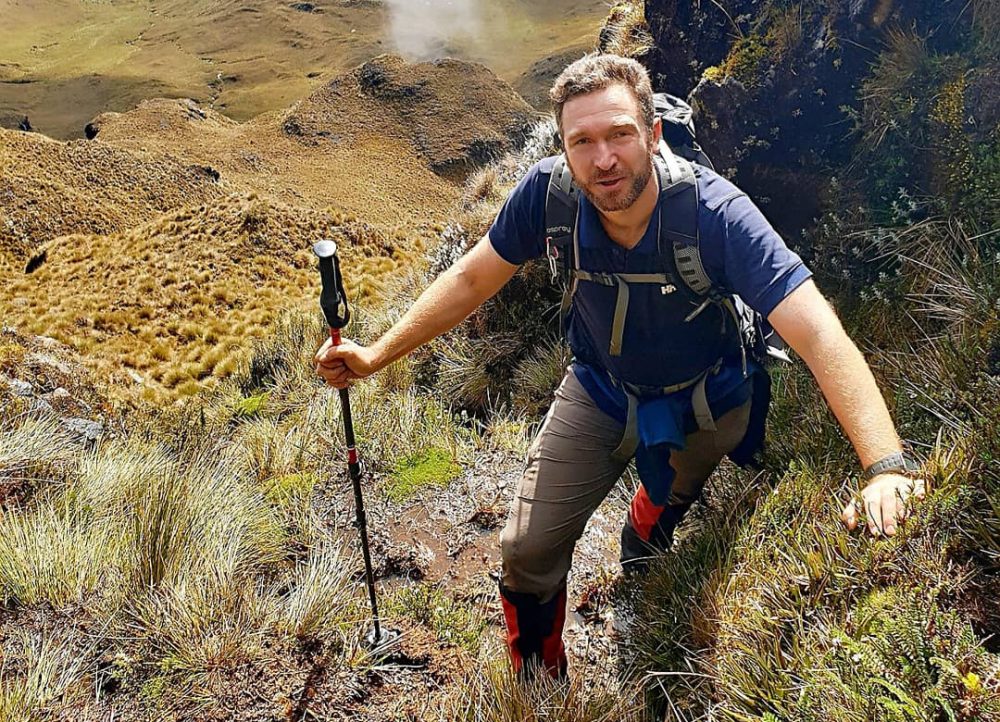 What is the attitude towards veganism in the climbing world? Is it generally accepted?

The attitude is improving, I’m not sure if it is accepted. Unfortunately, there is a stigma in the outdoor community that vegans are holier than thou. Other expedition members don’t want to hear about the environmental impacts of their expedition foods (like salami and cheese) whilst at the same time claiming to be environmentalists. It undermines their belief system so I tread carefully and try to lead by example. They are also worried there aren’t enough calories in plant-based foods. Thinking back, there were some trips I have been on where the company didn’t understand veganism and the food they provided us was thought to be “vegan” but had animal products. For example, on our trip to Aconcagua in 2014 we couldn’t eat a lot of the food that was provided so Marisa and I ended up on major calorie restrictions throughout the expedition. Fast forward to today and vegan options have improved remarkably. More so just in the last few years. For contrast, on my first trip to Union glacier (Antarctica) in 2017, I was prepared a special vegan meal by the chef as every option in the buffet had animal products. On my recent trip there in 2019 they had vegan options daily for everyone, this was a pretty happy moment of progress!

What is the ‘Vegan Seven Summits’?

The vegan seven summits was a challenge started by my late wife Marisa, to show that it is possible to climb the highest mountain on each continent on a plant-based diet. Since her passing I have completed the remainder of the seven summits in her honour. I am now well underway with the volcanic seven summits and the poles.

Have you noticed a difference in your health and in your physical performance in mountaineering since going vegan?

I feel extremely healthy for my age. I didn’t notice a major difference between going from vegetarian to vegan in my fitness ability as my diet was already predominantly vegan by the time I was mountaineering.  If I was to contrast my diet and fitness before any dietary changes however, then sure, more energy, better recovery and mental clarity. I feel like I’m doing the best thing I can to keep me healthy enough to continue being active until I’m an ancient man. 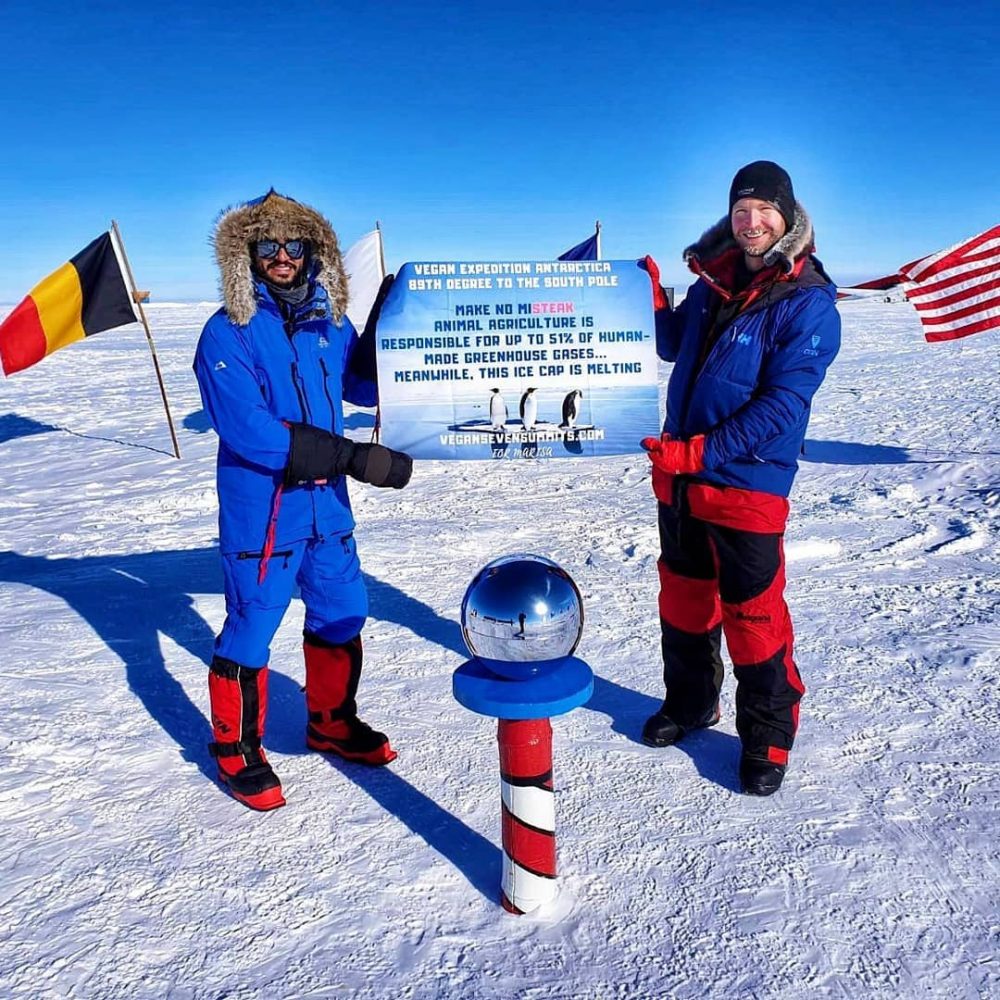 What type of training do you do in preparation for an expedition?

It depends on the expedition! If I’m hauling sleds in the Arctic or Antarctic I’ll pull tyres. If I’m heading into high altitude (above 4,000m) I’ll hike hills with a heavy pack and do a lot of running/ high intensity activity that help to assimilate different oxygen demands at altitude. My training isn’t special though, it’s the same as what most people do. I just like to make my pack heavier, run that extra kilometre and push myself to my limit because I can.

When getting ready to climb do you follow a certain meal plan in preparation? Or is it similar to what you normally eat on a daily basis?

I eat the same foods as I normally do which might surprise some folks. I just eat more of it during high training periods as I’m expending a lot more energy. My philosophy is to keep it simple, there’s no need to overcomplicate it.

Running a busy vet clinic, how do you find the time and energy to train for mountain climbing expeditions?

Ha! The golden question I ask myself at times… and the answer is, with difficulty! You just have to make it happen. The vet industry is currently experiencing a chronic shortage of vets and nurses so we are all working long hours. I tend to save my big runs/ hikes/ tyre pulling etc., for weekends when our clinic is open shorter hours. Finding windows of opportunity during the week is challenging but made easier when there’s a goal in sight. I’m a fan of quick garage chin-ups when I pull in the driveway from work at 8pm, a one hour run or a Hiit session in the lounge while dinner is cooking. I don’t think my body could handle the pressure on a meat-based diet.

What advice would you give to those who are vegan curious or new to veganism to enhance their athletic performance in general, and more specifically, for those wishing to pursue mountain climbing?

Apart from good whole-food nutrition principals like limiting the processed stuff, it is very important to be consistently active. Being vegan alone isn’t enough to maintain an optimum healthy lifestyle but it is certainly a great advantage in keeping those arteries clear so the blood can pump oxygen and nutrients effectively around the body. I routinely tell my clients with elderly dogs “the key to longevity is activity”.

To get into mountaineering means getting into exercise. To enjoy it there has to be motivation otherwise it just feels like a hard slog with little reward. I think the key is to surround yourself with like-minded people and friends you can train with who inspire and motivate you. Joining a running club, or sussing out the local gym or group fitness classes is a good place to start. I think following some mountaineers or athletes on Instagram gives you an idea of what to expect and helps in the inspiration department. As for where to begin, New Zealand is the best place to start basic mountaineering. My secret to getting fit is to sign up to an expedition first, pay the deposit and then you have no choice but to get fit, works like a charm! 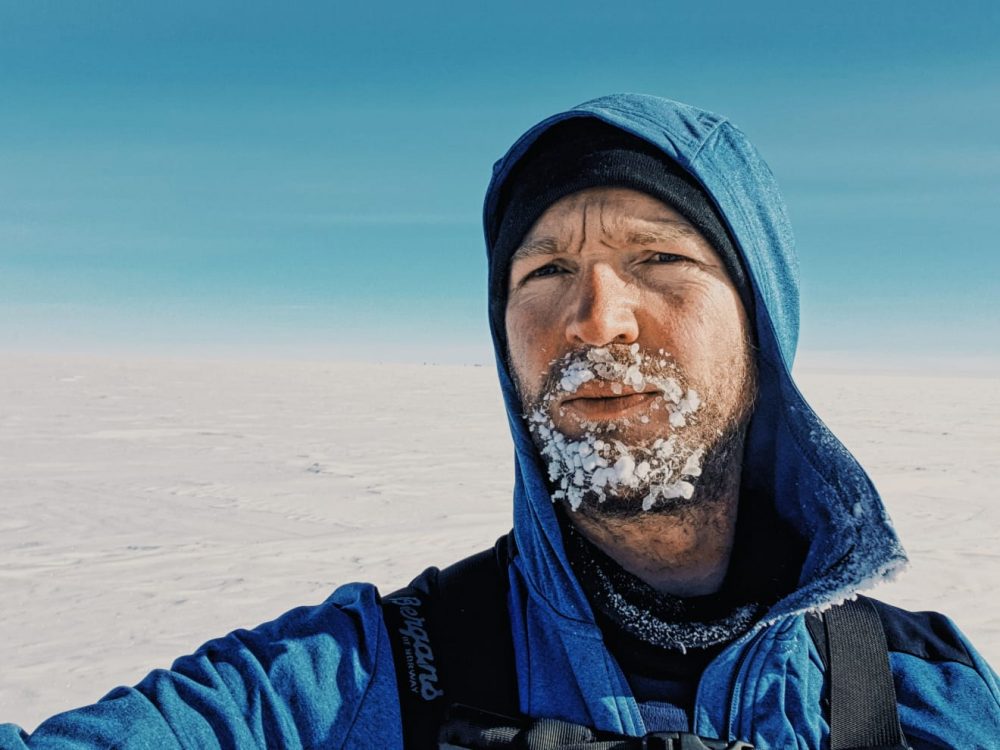 Are there any mountain climbers or other vegan athletes you admire that you’d like to share with our readers?

Some other outwardly vegan adventurers are Kuntal Joisher (summited Mt Everest the day before me) and Melbourne local, Dean Maher (who was the first to summit Everest in cruelty-free gear). Special mention to Atanas Skatov who passed away on the treacherous K2 (world’s second highest mountain) this year. He was the most successful big mountain vegan climber of our time.

Can you recommend any mountain climbing groups that people could join if they’re interested in taking up the sport?

There aren’t any groups I’m aware of domestically apart from bushwalking and rock climbing clubs. Internationally, New Zealand is a great place to start. Overseas companies like Alpine Ascents and Adventure Consultants are excellent to network with. Otherwise, make an Aussie group, I’d join it!

Which expedition would you say is your favourite experience so far?

The east-west crossing of Greenland.  It was a mammoth effort of the team hauling two sleds day after day for four weeks. There were many challenges along the way. We were all so isolated in such a wonderful place. My second summit of Denali with my wife was very special as well.

What is your favourite vegan meal to make?

What will be your next climbing adventure?

If it ever happens! I’m hoping to get to the North Pole in April 2023.