Biggest analysis to date reveals huge footprint of livestock - it provides just 18% of calories but takes up 83% of farmland.

Cattle at an illegal settlement in the Jamanxim National Forest, state of Para, northern Brazil, November 29, 2009. With 1,3 million hectares, the Jamanxim National Forest is today a microsm that replicates what happens in the Amazon, where thousands of hectares of land are prey of illegal woodcutters, stock breeders and gold miners. Photograph: Antonio Scorza/AFP/Getty Images

Avoiding meat and dairy products is the single biggest way to reduce your environmental impact on the planet, according to the scientists behind the most comprehensive analysis to date of the damage farming does to the planet.

The new research shows that without meat and dairy consumption, global farmland use could be reduced by more than 75% – an area equivalent to the US, China, European Union and Australia combined – and still feed the world. Loss of wild areas to agriculture is the leading cause of the current mass extinction of wildlife.

The new analysis shows that while meat and dairy provide just 18% of calories and 37% of protein, it uses the vast majority – 83% – of farmland and produces 60% of agriculture’s greenhouse gas emissions. Other recent research shows 86% of all land mammals are now livestock or humans. The scientists also found that even the very lowest impact meat and dairy products still cause much more environmental harm than the least sustainable vegetable and cereal growing. 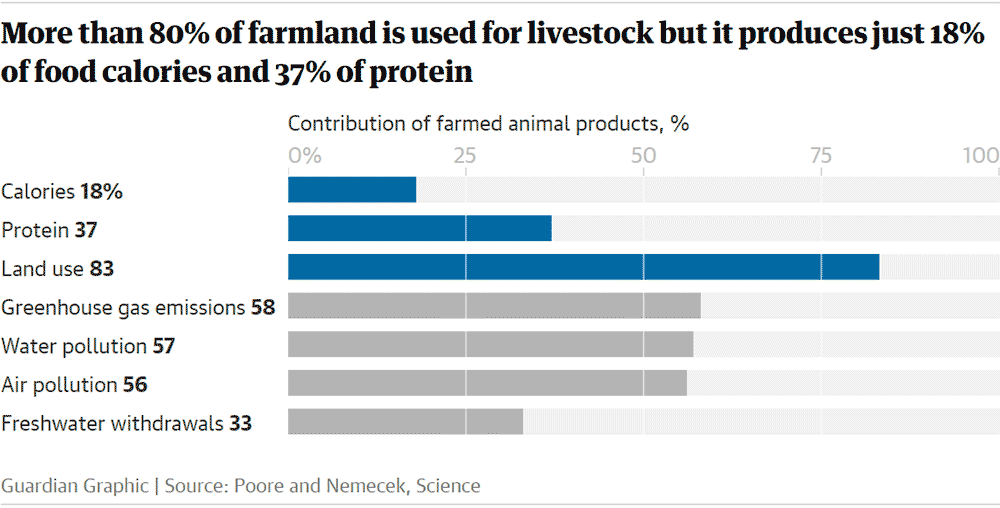 The study, published in the journal Science, created a huge dataset based on almost 40,000 farms in 119 countries and covering 40 food products that represent 90% of all that is eaten. It assessed the full impact of these foods, from farm to fork, on land use, climate change emissions, freshwater use and water pollution (eutrophication) and air pollution (acidification).

“A vegan diet is probably the single biggest way to reduce your impact on planet Earth, not just greenhouse gases, but global acidification, eutrophication, land use and water use,” said Joseph Poore, at the University of Oxford, UK, who led the research. “It is far bigger than cutting down on your flights or buying an electric car,” he said, as these only cut greenhouse gas emissions.

“Agriculture is a sector that spans all the multitude of environmental problems,” he said. “Really it is animal products that are responsible for so much of this. Avoiding consumption of animal products delivers far better environmental benefits than trying to purchase sustainable meat and dairy.” 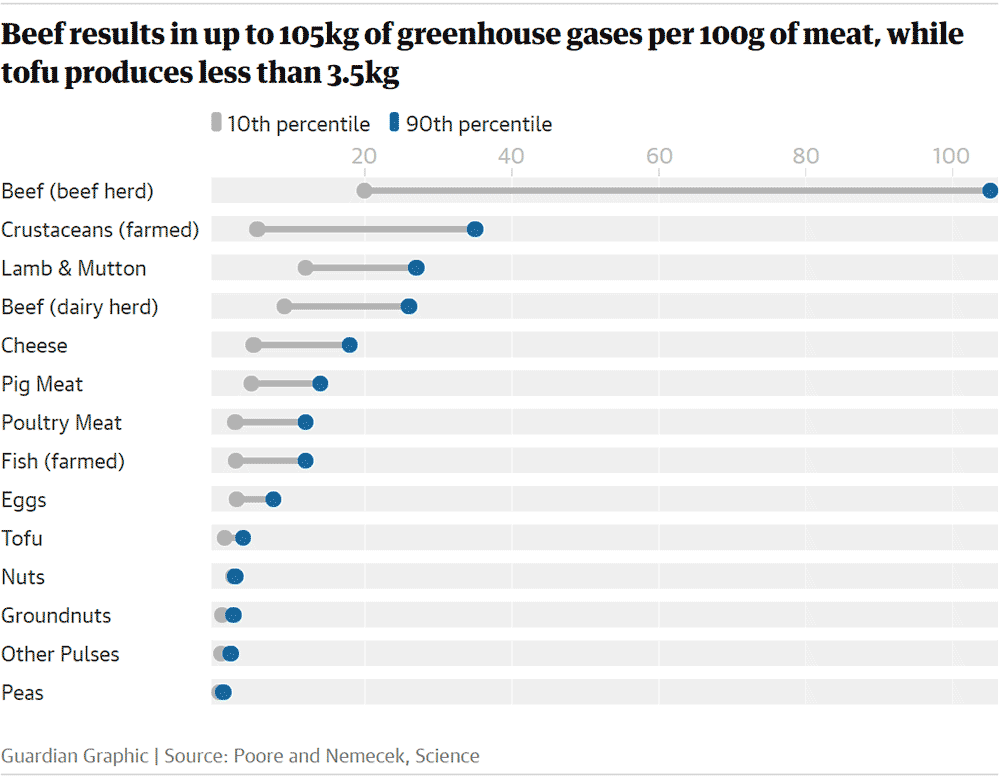 The large variability in environmental impact from different farms does present an opportunity for reducing the harm, Poore said, without needing the global population to become vegan. If the most harmful half of meat and dairy production was replaced by plant-based food, this still delivers about two-thirds of the benefits of getting rid of all meat and dairy production.

Cutting the environmental impact of farming is not easy, Poore warned: “There are over 570m farms all of which need slightly different ways to reduce their impact. It is an [environmental] challenge like no other sector of the economy.” But he said at least $500bn is spent every year on agricultural subsidies, and probably much more: “There is a lot of money there to do something really good with.”

Labels that reveal the impact of products would be a good start, so consumers could choose the least damaging options, he said, but subsidies for sustainable and healthy foods and taxes on meat and dairy will probably also be necessary.

One surprise from the work was the large impact of freshwater fish farming, which provides two-thirds of such fish in Asia and 96% in Europe, and was thought to be relatively environmentally friendly. “You get all these fish depositing excreta and unconsumed feed down to the bottom of the pond, where there is barely any oxygen, making it the perfect environment for methane production,” a potent greenhouse gas, Poore said.

The research also found grass-fed beef, thought to be relatively low impact, was still responsible for much higher impacts than plant-based food. “Converting grass into [meat] is like converting coal to energy. It comes with an immense cost in emissions,” Poore said.

The new research has received strong praise from other food experts. Prof Gidon Eshel, at Bard College, US, said: “I was awestruck. It is really important, sound, ambitious, revealing and beautifully done.”

He said previous work on quantifying farming’s impacts, including his own, had taken a top-down approach using national level data, but the new work used a bottom-up approach, with farm-by-farm data. “It is very reassuring to see they yield essentially the same results. But the new work has very many important details that are profoundly revealing.”
Giving up beef will reduce carbon footprint more than cars, says expert

Read more
Prof Tim Benton, at the University of Leeds, UK, said: “This is an immensely useful study. It brings together a huge amount of data and that makes its conclusions much more robust. The way we produce food, consume and waste food is unsustainable from a planetary perspective. Given the global obesity crisis, changing diets – eating less livestock produce and more vegetables and fruit – has the potential to make both us and the planet healthier.”

Dr Peter Alexander, at the University of Edinburgh, UK, was also impressed but noted: “There may be environmental benefits, eg for biodiversity, from sustainably managed grazing and increasing animal product consumption may improve nutrition for some of the poorest globally. My personal opinion is we should interpret these results not as the need to become vegan overnight, but rather to moderate our [meat] consumption.”

Poore said: “The reason I started this project was to understand if there were sustainable animal producers out there. But I have stopped consuming animal products over the last four years of this project. These impacts are not necessary to sustain our current way of life. The question is how much can we reduce them and the answer is a lot.”