Making honey without bees and milk without cows

Three companies are using fermentation to create molecularly identical foods, minus the animals. 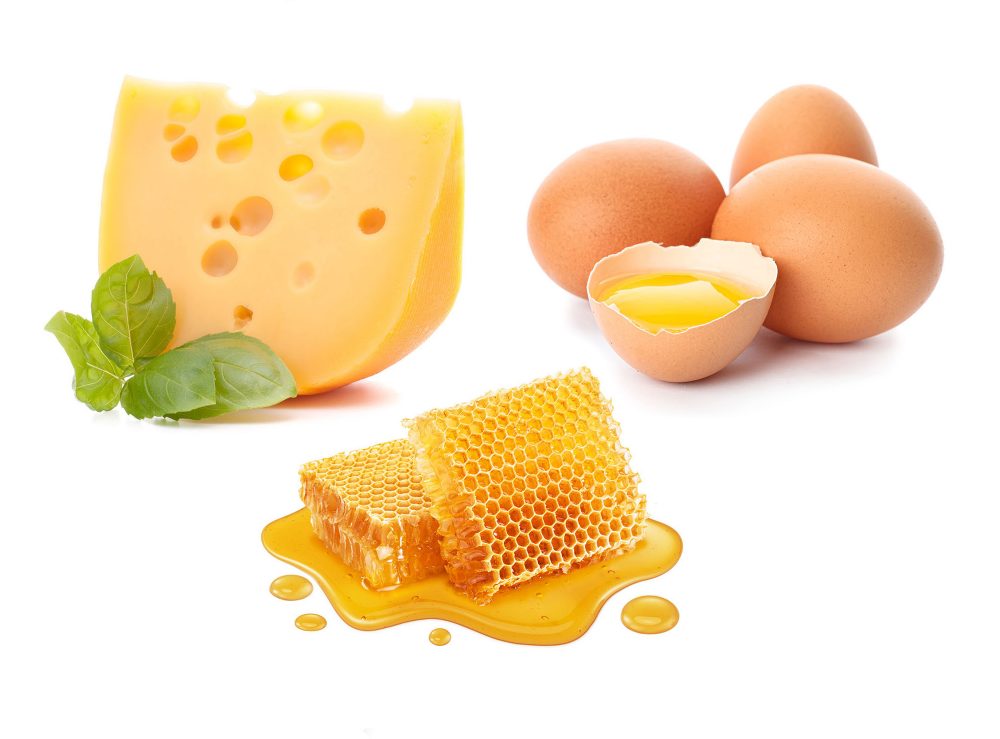 “As a vegan myself, I definitely miss consuming honey,” says Darko Mandich, co-founder and chief executive of MeliBio, wistfully.

It’s not unusual for vegans to miss certain foods. What is unusual, though, is Mr Mandich’s solution: to create a type of honey, identical to the natural kind in every molecule, but produced without involving any bees at all.

“When you look at honey and how it’s made, it starts with bees collecting pollen and nectar from the flowers and then converting that into the building blocks of honey, which are fructose and glucose,” he says.

“We are simulating that in the lab, using micro-organisms which do the work of building the initial blocks of honey.”

Over the last few years, plant-based alternatives to meat and dairy have become increasingly widespread. However, for many, they simply don’t come up to scratch in terms of flavour, texture or ease of use.

But now, a number of start-up companies, like MeliBio, are looking to use fermentation to produce vegan products that are identical biologically to the real thing.

Through the process of fermentation, micro-organisms digest a food supply and excrete a useful product – yeast, for example, is fed sugars and produces alcohol to make beer.

But by tailoring the micro-organism carefully and choosing the right feed stocks, it’s possible to create a different end product – anything from honey, to egg whites, to milk. 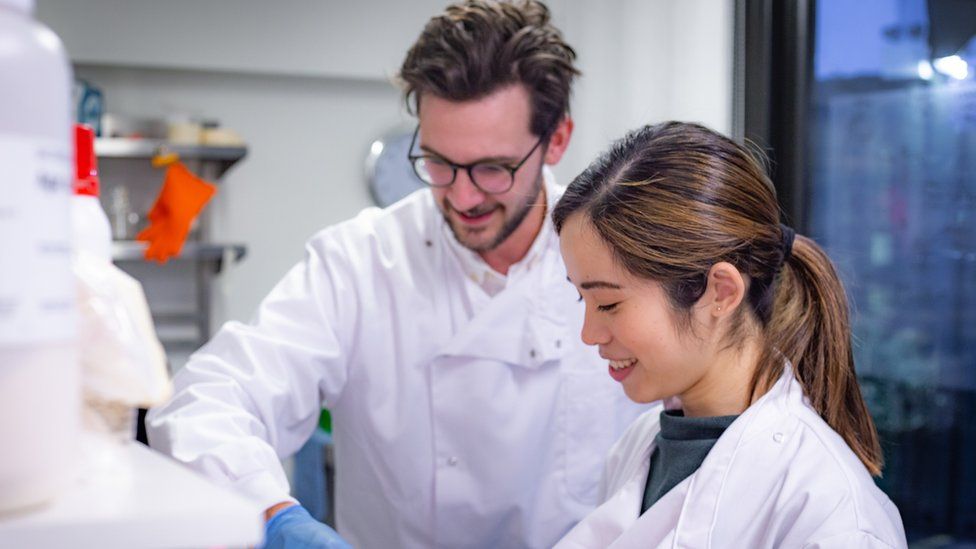 At the Better Dairy labs they are creating milk and cheese credit: Sophotogenic Photography

One company taking this approach is Better Dairy, a London-based start-up developing milk and cheese through yeast fermentation.

“The way it works is that you can use yeast in the way that we use yeast for beer brewing – but we tweak the yeast so that instead of producing beer, it produces what we want it to produce,” says Jevan Nagarajah, co-founder and chief executive.

“So the technology is using yeast as a conversion platform from the input sugars and the things that you’d usually feed it, and turning that into dairy, in our case.”

Similar techniques are being used to produce egg whites, with San Francisco-based Clara Foods on the brink of mass production and hoping to become the world’s largest egg protein producer by 2028. 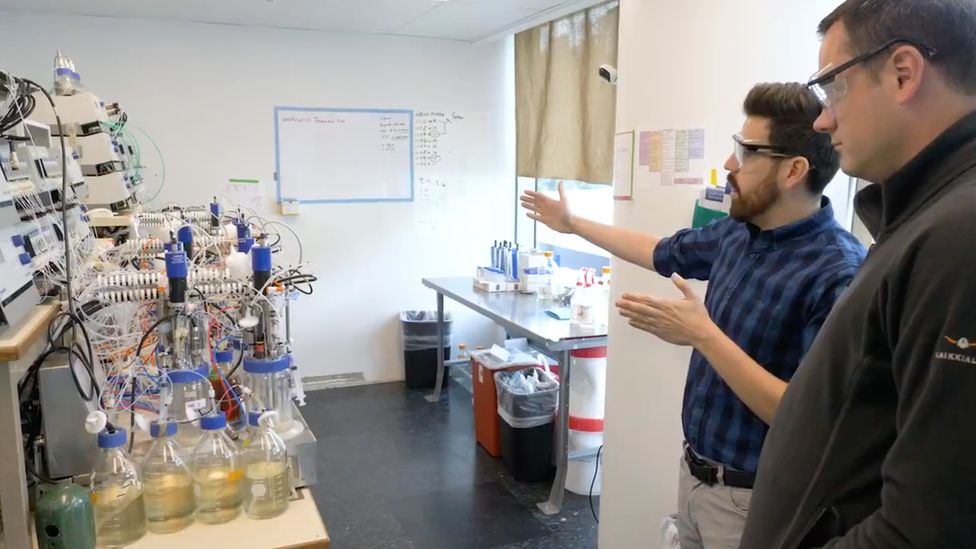 Clara Foods says its fermented egg product can be even better than the real thing credit: Clara foods

“Our proprietary fermentation technology allows us to control and even surpass the texture, taste and culinary functionality of animal-derived egg counterparts,” says co-founder and chief executive Arturo Elizond.

As well as making vegans happy, cultured products may have environmental benefits.

According to the UN’s Food and Agricultural Organization, meat and dairy between them account for about 14.5% of global greenhouse gas emissions.

Meanwhile, the world’s appetite for honey is harming many species of bee, says Mr Mandich.

“Commercial beekeeping is favouring a single bee species, the honey bee, all over the world to meet the rising demand for honey,” he says. “They are actively competing with wild and native bee species and pushing them back.”

Darko Mandich, chief executive of MeliBio, hopes to sell his honey to the food, drinks and cosmetics industries credit: MeliBio

We’re likely to see the first bio-identical dairy products as ingredients in other products, rather than in cartons or jars on supermarket shelves.

“Around two-thirds of the honey sold in the markets is honey as an ingredient for other products – industries like food, beverages, cosmetics and pharma. So we as a company are starting with a business-to-business model first,” says Mr Mandich. “We already have 15 companies in the US who have signed letters of intent.”

MeliBio expects to start its first deliveries at the end of this year.

Better Dairy has a similar strategy. The company’s a little further behind in terms of commercialisation, but is confident that it will be able to produce at scale, and is looking to sell to restaurant chains.

“If you think of someone like Pizza Hut or McDonald’s where you need a cheese that melts in a very specific way, it’s very difficult to have a cheese that’s meltable and actually vegan, and that doesn’t turn into a pool of oil and starch when you cook it,” says Mr Nagarajah.

One issue with commercialisation will be labelling – are these products really milk, eggs or honey? The companies are hopeful that the authorities will see it that way.

“It is molecularly identical, so it should be the same,” says Mr Nagarajah. “But if we have to choose a different name, so be it.”

One intriguing possibility of fermentation-based animal products is the chance to create products that are better than the real thing. 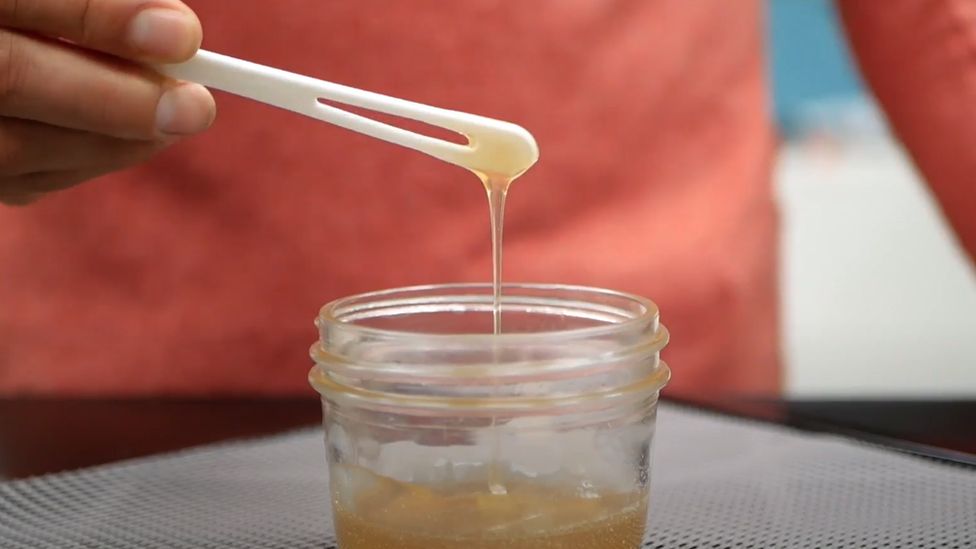 Fermented honey is likely to be sold first as an ingredient credit: Melibio

In the case of honey, for example, there’s no reason why production couldn’t be tailored to produce a perfect copy of manuka honey – claimed to have health benefits, and costing around 100 times as much as normal honey.

“By doing it this way, we wouldn’t have to put lactose in our products. We’d replace that with another sugar that’s easier for people to digest,” says Mr Nagarajah.

“And there are other opportunities. We’re starting off with cows’ milk, but actually the same technique can be used for human milk and infant formula applications.”

In the meantime, Mr Nagarajah gets to eat honey again – if only in small quantities for now.

“I tasted the 23rd prototype two days ago,” he says.